The TSA is a Terrorist Organization that Endangers Every American. 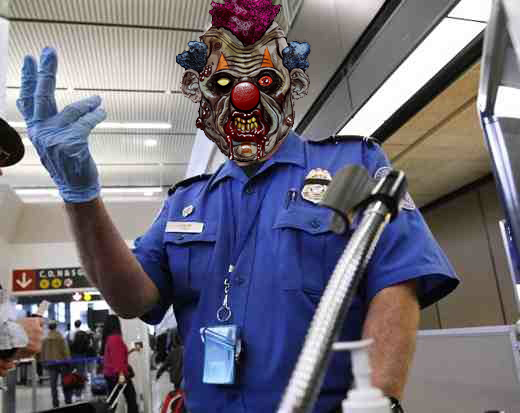 Phoenix, AZ—As Americans travel for family get-togethers much more than their dignity, privacy and liberty are at stake.
The abusive TSA has cost the airlines millions of lost passengers and staggering revenue.  Particularly on trips of less that 800 miles people will drive just to avoid being insulted, groped and otherwise victimized by the TSA workers.
Highway deaths because of millions of additional cars clogging our highways have skyrocketed.  It has been estimated that at least 500 additional deaths happen now every year.  That does not count the thousands who are only maimed or the massive property damage.
The TSA has hired every unskilled, unemployable or mentally defective person they could.  They have placed these pathetic souls into police costumes and let them run wild groping our genitals.  They for the most part TSA workers escape accountability for their rudeness and endless missteps.
We can either stop the TSA or allow this cancer to spread.  Do we really need to grope traveling Americans?  Why do we still allow people with passports from our enemy nations to fly on our planes?  Why haven’t we trained and required every pilot to fly armed?  Confiscating expensive cosmetics from women or grandma’s cranberry sauce does not make us safer.
The TSA has not stopped a single terrorist event in its entire history.  Ordinary passengers that realized that their lives depend on self-reliance are the ones that have stopped those attempted terrorist incidents.  We all learned on 9/11 that calling 911 at 30,000 feet and getting help is impossible!
We want to be safe but the illusion of security and the showmanship of the TSA has become an un-Constitutional bad joke.
We must defund and eliminate the TSA.  We do need security and that should be provided by qualified and trained cops who can profile passengers for behavior signs throughout the airports.
The TSA loves to brag about discovering forearms in forgetful passenger’s carry-on bags.  The TSA calls the cops and these people are forced to pay thousands for their criminal defense costs and fines. These people were never a threat to anyone.  There has never been an incident where intent to commit any kind of a firearm assault or terrorism by passenger was discovered.
The financial devastation to our economy along with the cost in human lives along with loss of privacy and basic dignity cannot be measured.  We now fear the TSA more than foreign terrorists.