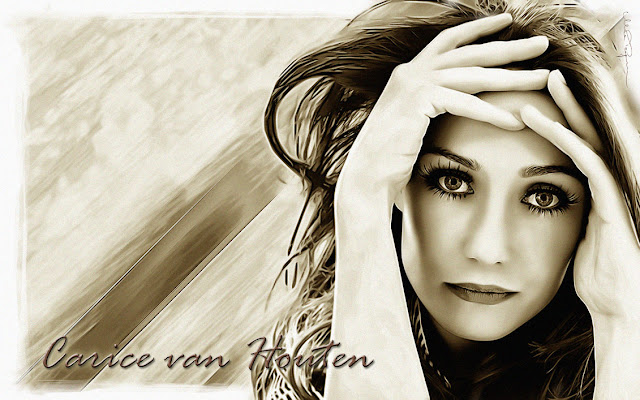 Amsterdam, NL—The incredibly talented actress Carice van Houten is apparently at an impasse in her life whether to continue acting or to take on a singing career.   At this juncture she’s told several publications that she’s having more fun singing.  She’s about to give her first concert with Rufus Wainright later this month in this beautiful city of the Dutch Masters.
Van Houten is a terrific actress that has not really gotten a solid foothold in the U.S.  The Paul Verhoeven film, Black Book showcased the actress’ beauty and many talents.  The problem was the film was mostly in Dutch and subtitled.  It did not get the kind of distribution and promotion it deserved.  Of course in Europe it was a genuine hit.  For me personally, it was the best film I’ve seen to date.
Van Houten was given the role of Nina Von Stauffenberg in the film Valkyrie starring Tom Cruiz.  Unfortunately Valkyrie’s producers and writers did not give enough tribute to van Houten’s character.  That brave woman was sent to a concentration camp for her resistance activities.
Another film was made that has yet to see daylight here is Jacky.  That’s a film staring Holly Hunter with Carice van Houten and her younger sister Jelka van Houten.   This film was shot in New Mexico.  Hopefully does eventually get some promotion and distribution.
Van Houten recently visited L.A. and tweeted a picture that seemed to indicate she also took a road trip to Tucson, AZ.  I know she visited her agent in L.A. but the purpose rest of her trip was a mystery, at least to me.   I suspect she was looking for new projects here.  Her Hollywood agent at CAA has to do a much better job of promoting her.
Hollywood is loaded with nepotism and corruption of every kind.   It too often takes more than great talent to get cast into any film with a significant budget.   I hope van Houten's trip went well because she is a terrific and bright star America needs.
Van Houten is a dedicated actress that will never settle for a second rate performance.  She may make what she does look easy but countless hours of blood, sweat and tears goes into everything she does.  Her hard work and dedication pays of in her finished product.
Van Houten’s first CD; See You On The Ice can be obtained from iTunes and Amazon.com.  I found it very enjoyable.  I expect there will be more music from Van Houten.  Hopefully it will not be at the expense of her absence on the silver screen.