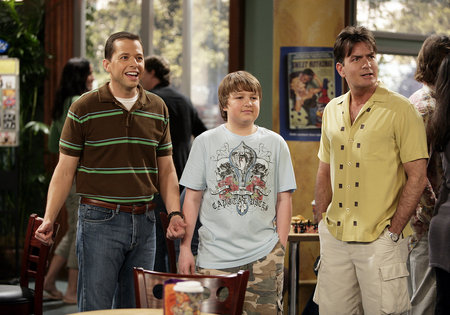 Los Angeles, CA—I have to admit it I enjoy watching the original Two and a Half Men Show a lot.  It is filled with references to Charlie Sheen’s lust for sex, drugs, rock and roll.  There is no sexual subject off limits in this masterpiece of satire.  Is this really an icon of our moral decay?  I don’t think so.  Unless of course you take the story’s line too seriously.
To understand the world we live in these racy subjects should not be off limits but perhaps displayed as an example of the irreverence, excess and self-destruction.  The show’s characters are all flawed and dysfunctional.  This is comedy and all comedy is born of pain.  We laugh as these fictional people are put through their paces.
We can’t take this show seriously because it’s fiction and fantasy. It’s a vehicle for us to put aside our own misfortunes or challenges and laugh at the show’s humor.
From time to time I’d considered the lad Angus T. Jones who plays Jake a little young for the show's content. .  He got his sex education at breakneck speed on this show.  Along the way the young Jones lad has been financially set for life and has a bright future.  Just what he wants to do with it will be up to him but I doubt that he’s been ruined by the show.
Jones has recently suggested that the viewers of the show should discontinue watching.  He’s taken exception to the show’s moral compass or rather the lack of one.  He’s apparently become influenced by religion and feels that the show helps foster and promote bad behavior.
I say it’s a sad day when art dictates to anyone how life should be lived.   I think we all understand that our basic humanity and hearts tell us right from wrong.  We all know these fictional characters are somewhat extreme and too often morally bankrupt.  I just don’t view this show as a behavioral influence.  Maybe I’m giving too much credence to my fellow human beings.
As for the young super-star, Jones, and this participation in this somewhat decadent, crude and rude show he is now living on Easy Street.  He can get formal education that others can only dream about while he lives in safe neighborhoods and commutes in a very reliable automobile.   He will be able to marry and raise his own children without most of the desperate challenges most Americans have to deal with.
We cannot dismiss that Jones has had to work very hard keeping up with difficult shooting schedules and promotional efforts.  This of course while completing schoolwork for his normal development.
Is young Jones suddenly ungrateful?  I don’t see that at all.  He’s just trying like all of us to find his own way to live a productive and meaningful life.  If anything I believe the show has made him more aware of how he should, live, love and stay healthy.
Here is young Jones’s take on the show that made him rich well before he completed puberty.  I think this lad will figure it all out and know what’s right for him.

Email ThisBlogThis!Share to TwitterShare to FacebookShare to Pinterest
Labels: Angus T Jones, Charlie Sheen, Two and a Half Men

Paul, I agree with you that Angus has not become ungrateful. He's grown and now realizes that the story he participated in is, based upon his discovered morality, immoral. Funny, but immoral.

I would say that you do overestimate the discernment of your fellow humans. While we may have a good sense of right and wrong, we often get comfortable with situations that are in conflict with our morality. TV is a great medium for accomplishing that. Week after week, we watch situations that put us at ease with things we previously considered wrong.

This can be good. The Huxtables and the Jeffersons made us more comfortable with blacks.

And it can be bad. Lots of police shows make us comfortable with ends justifying means -- lying to suspects, beating suspects is OK because it leads to catching bad guys.

Two and a Half turns eccentric sexual immorality into just another acceptable form of fun and games.

I enjoyed the show myself, but watching it has not been a healthy form of entertainment.

He looks like a north sider.A little light in the loafers too I think.