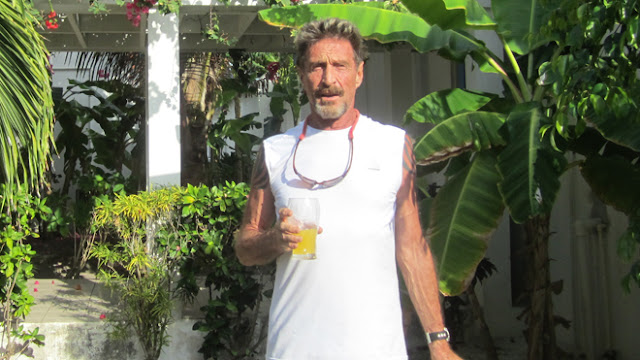 San Pedro, Belize—In this exotic nation there is a dangerous manhunt going on. They’re looking for software anti-virus genius John McAfee.  An American expatriate Gregory Faull was found shot to death here.  Police are calling this death a murder and have launched the desperate search for McAfee as their suspect.
There are several reports that McAfee has been involved with using various drug including bath salts.  Apparently he also likes firearms.  This may be a bad combination but this does not make him or anyone else a killer.   Those reports could also be a bunch of lies.
McAfee needs a lawyer to arrange his surrender if he’s not able to escape and seek refuge somewhere that does not have an extradition treaty with Belize.
Dead men can’t talk and suspects too often can’t wait to tell authorities excuses, lies or even the truth that gets used against them later.  McAfee must not discuss details or possible alibis with anyone.   He can't talk his way out.
As badly as he needs a lawyer he needs an investigator on the ground interviewing every witness that may be later used to hurt or help him.
This is far from a lost cause.  McAfee needs to take the steps to clear his name immediately.   I don’t blame him or anyone for flight from authorities.  Generally police and prosecutors can’t be trusted to do the right thing.
McAfee needs good PR assistance to help squelch rumors and get the helpful information out to shape public opinion.
This criminal defense murder investigation was made for me.  I’d be on a plane in a heartbeat to work this case and get to the truth.
Posted by Paul Huebl Crimefile News at 11/13/2012 09:56:00 AM