The Obama Administration Response To Hurricane Sandy is Appalling 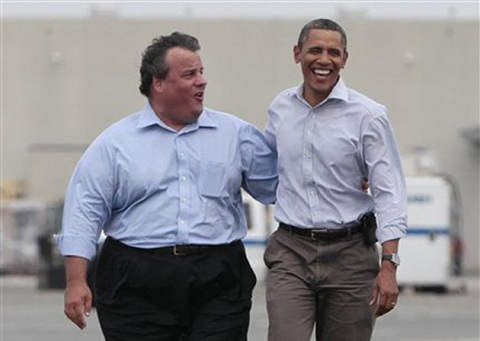 Washington, DC—The Obama Administration has been mired in preparations and protocol for interning millions of American under the NDAA and other outrageous programs.  Dealing with a natural disaster was obviously just not a priority.
The Obama Administration had a week’s warning and could have begun assembling massive amounts of drinking water, food and fuel for swift movement to any affected areas.
Nothing began until well over eight million people had no power, drinking water, food, prescription drugs or communication from the outside world.   Only then were efforts made to locate and distribute emergency provisions.  Unforgivably and incredibly it was all too little and too late.
Obama came in for political campaign photo opportunities and quickly beat it back to battleground campaigning states.  The political Left gushed over the skinny Black President hugging the chubby White New Jersey Governor during their Love-In.  That did not produce any relief to the suffering millions far away from this spectacle.  Remember they can’t watch what’s going on television or the Internet in what’s left of their darkened, water-soaked homes.
Now we can count on a continued humanitarian and health crisis as the nation’s voters deal with the mighty slim-pick in’s at the polls Tuesday.
The Obama Administration get’s an F for their performance.  That’s well behind a long litany of other failures and missteps.
I somehow expect more treachery and tyranny to emanate from the Whitehouse especially if the election does not favor Obama.  Remember, no matter what happens at the polls, Obama will have his finger on the national trigger until he’s evicted from the Whitehouse in January.
Posted by Paul Huebl Crimefile News at 11/03/2012 06:14:00 PM

The complicit media is ignoring Sandy, as well as Benghazi.

After seeing this pix I am afraid any aid I send to the relief will wind up in Obamas pocket. So I plan to keep my money. I hope he gets beaten in the next election, even by a ugh "democrat".

If Obama wins the election I fear that fatass Christie may have given him the boost to win. Like the media is reporting, Obama couldn't have gotten that kind of positive press even if he had spent $10 million bucks.