Berlin, Germany-Just outside the beautiful and spectacular Sony Center Shopping mall here there is a simple sidewalk brass marker.  It is a reminder of terrible time in history when total judicial tyranny was practiced under National Socialism 1933-1945.  Murder under color of law was the mission of the Chief Justice, Roland Freisler.
Freisler served in the WWI German Military where he was wounded and captured by Russians.  While in captivity, Freisler embraced Marxism turning his back on his homeland.  He joined the Communist party upon release but once again switched his allegiance joining the burgeoning Nazi Party.  Frisler proved to be quite a social climber.
Freisler was a lawyer and was later appointed by Adolph Hitler as the People’s Court President.  It has been said that he Freisler constantly proving himself as a super Nazi to counter those who questioned his changing loyalties.

Freisler was ruthless and merciless as he sent over 5,000 German men, women and teenagers to the guillotine or gallows for even the most minor acts of resistance.  Evidence presented before the court was often simple hearsay.   The People’s Court court acquitted only a scant few before it.

Freisler was also one of Hitler’s Judges that made sure everything done by the Nazi government was legal. He was also chosen as one of 15 high ranking Nazis that promulgated the Holocaust at the Wansee Conference during a two-hour luncheon.
Freisler escaped the hangman when he was killed during an Allied bombing raid on February 3, 1945 successfully targeted the People’s Court building.  Rather than take refuge in a bomb shelter Freisler was busy safeguarding case files of those he was trying to murder.
Americans have a strong Constitution that contains a Bill of Rights.  Freisler's spirit is alive today and exists in every courtroom of the world where judges refuse or fail to protect the rights of those unfortunate enough to appear before them. We must make doubly sure that as our judges that lose sight of their duty to protect citizen’s rights are brought to book and harshly punished for any and all tyrannical acts. 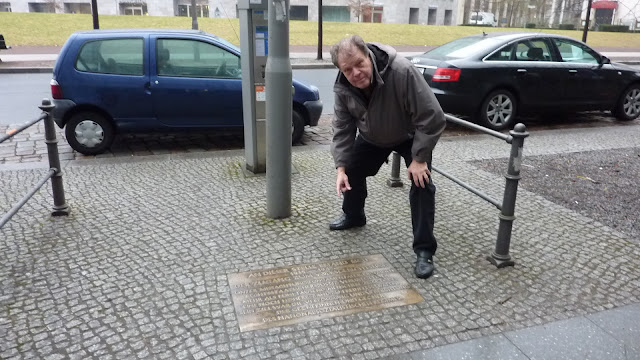 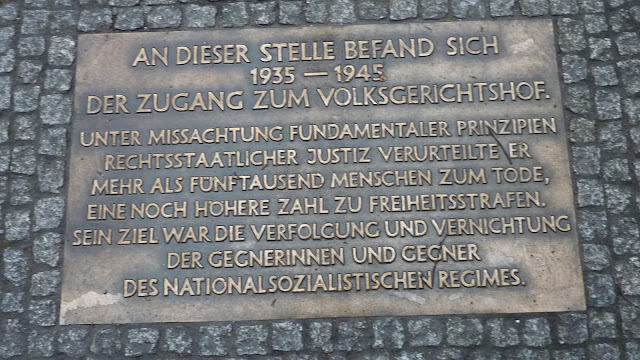 This Brass Marker translated into English reads:
“On this site 1935-1945 was the entrance to the People’s Court.
In violation of fundamental principles of constitutional justice, they condemned more than five thousand people to death.  Freedom was taken from even a higher number that were targeted for persecution and extermination of all opposed to the Nazi regime.”

And now it happens to some degree in USA

In a new interpretation of the Espionage Act, a (US) federal judge made it easier for prosecutors in leak cases to meet their burden of proof, while reducing protections for accused leakers.

Judge Colleen Kollar-Kotelly ruled that the prosecution in the pending case of former State Department contractor Stephen Kim need not show that the information he allegedly leaked could damage U.S. national security or benefit a foreign power, even potentially.

{The Federal Judge's] opinion was a departure from a 30-year-old ruling in the case of U.S. v. Morison, which held that the government must show that the leak was potentially damaging to the U.S. or beneficial to an adversary.

(In that case, Samuel L. Morison was convicted of unauthorized disclosure of classified intelligence satellite photographs, which he provided to Jane’s Defence Weekly. He was later pardoned by President Clinton.)

That is all very interesting but I think you’re missing the point a little bit. When Hitler seized power upon the death of Hindenburg he violated their Constitution and interestingly enough he never bothered to change it either. They were a Constitutional Republic similar to our own and from the day after Hindenburg’s death they simply ignored their Constitution. The German legal establishment – their judiciary was never asked to bend for Hitler either – he simply replaced them with a new one. This is the danger we should be mindful of and I believe is what Chief Justice John Roberts fears the most.

That would explain his recent decisions too. In the Obamacare decision he scolded us and said that we shouldn’t come looking to him to correct our poor political decisions. I think he bent logic and reason in that decision to accommodate the powerful forces behind the president because he feared that they might seek to invent a competing or replacement judiciary as Hitler did.

Governments only exist because people believe in them. If the populist forces that brought the president to power were to attempt to sell the people on the idea that our courts are too corrupt to salvage they could attempt to establish a completely new judiciary and common law that favors their way of thinking.

Such a competing judiciary actually does exist and a showdown is in the making between it and the public judiciary. The secret national security courts that have been ignoring our Constitution are coming into the light of day and soon our Supreme Court is going to be asked to exercise authority over them. That will be a real test and I think Roberts has maneuvered his Court into a good political position to face that test. By welcoming the incompetent liberal justices he has taken away any argument that the irrational liberal viewpoint is not represented on his court. By splitting his decisions between the irrational and the reasoned he has taken away any argument that he favors on side over the other. He has made himself the ultimate moderate and able to appeal himself to all sides. He is going to need that if he ever hopes to bring these secret courts under his jurisdiction. Right now they operate completely independent and appear to have no loyalty to established law. Their decisions that we know of have been an outrage and no one knows to what extent they exercise authority.

Has any American ever stood jeopardy before them? We don’t know and we also don’t know by what rules by they operate. We know the written law gives them only limited jurisdiction but since they completely ignore the Bill of Rights can we be confident that they respect any law now established? We can’t and therefore they must be brought out into the light and examined or none of us can be confident in our safety from them.

In my opinion we have little to fear that our present judiciary will be corrupted. We have always had activist judges that overreach but they are usually brought under control by higher courts. It is these secret courts we must fear.

Center for Constitutional rights released the following statement today in response to the verdict in the Bradley Manning trial:

“While the 'aiding the enemy' charges (on which Manning was rightly acquitted) received the most attention from the mainstream media, the Espionage Act itself is a discredited relic of the WWI era, created as a tool to suppress political dissent and antiwar activism, and it is outrageous that the government chose to invoke it in the first place against Manning. Government employees who blow the whistle on war crimes, other abuses and government incompetence should be protected under the First Amendment.

We now live in a country (USA) where someone who exposes war crimes can be sentenced to life even if not found guilty of aiding the enemy, while those responsible for the war crimes remain free. If the government equates being a whistleblower with espionage or aiding the enemy, what is the future of journalism in this country? What is the future of the First Amendment?

Manning's treatment, prosecution, and sentencing have one purpose: to silence potential whistleblowers and the media as well. One of the main targets has been ... WikiLeaks and Julian Assange, for publishing the leaks. Given the U.S. government’s treatment of Manning, Assange should be granted asylum in his home country of Australia and given the protections all journalists and publishers deserve.

We stand in solidarity with Bradley Manning and call for the government to take heed and end its assault on the First Amendment.”

CCR filed a case challenging the lack of transparency around the Manning trial. The charges of which Manning were accused represent an ongoing assault on dissent and an attempt to chill any voices seeking transparency and accountability from government officials. Manning's prosecution is also a portent of the potential threat to anyone who uses the internet to share information.

All of this is due to popular consent by the citizenry, which in turn is driven by elevation of their concept of "government" (the political system) to the status of Earthy God.

Even a cursory examination of people's attitudes toward their rulers finds celebrity worship, adolescent trust, and a sort of hopefulness found when small children describe the image of Santa Claus in their minds.

There is a yawning chasm between citizens who are (justifiably) terrified of the Total State and those who childishly see it as a wellspring of human betterment.

This environment empowers the most sociopathic of people and accelerates the USA's descent toward the world's worst-ever tyranny.

Our present judiciary is corrupt. With your defense of Roberts, you reveal that you harbor delusions that the Supremes are any different from the most corrupt local JP.

It has been quite apparent for a at least the last 6 to 8 years, that we have been rapidly entering a very serious political crisis. I have referred to it in several ways. "A Hot Cold War." "The Elite Ruling Criminal Class" and over the last while, "A Bush/Obama, Marxist/Fascist, Police State."
The increasing militarization of our police, the extraordinary increase in private arms, and ammo purchases, and the truly astounding court decisions coming from every level in the judicial system, such as this.
I say; "Wake Up! The government in Washington has become your, my and our Constitutions enemy.

Which people does the court favor? Very much depends on which country, the politics of the time, and being at the right airport terminal - at the right time.

In the U.S., 55% of Americans said Mr. Snowden is a whistleblower, rather than a traitor, according to a national opinion poll released Thursday by Quinnipiac University.

Unwittingly or Wittingly - the People's Court, a Secret Court or the FISA Court

the acting is not too believable...( it does help to be in the know - thanks to you know who)