Why I Distrust and Fear Barack Obama 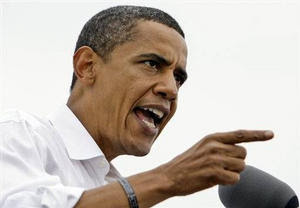 Washington, DC—Barack Obama campaigned on an “open government” but he’s reneged and has been more secretive and divisive that any president. Rather than address our economy he has given away our treasury to Wall Street crooks, failed automakers and criminal organizations such as ACORN.

Obama has perverted the purpose and mission of the Department of Homeland Security to target his political opposition and to wean Americans off of their liberty and freedom. The Obama sanctioned actions of Secretary Janet Napolitano are frightening and treasonous. They have brought us government tyranny and economic collapse rather than to control or effect terrorism to the slightest degree.

Homeland Security’s only success was to divert millions of Americans from air travel with devastating consequences to the entire tourism industry by their intrusive and criminal fondling.

Obama knows he can’t get reelected and he’s maneuvering the nation into an insurrection with his instigation and support of the ACORN and SEIU thugs that have begun an occupation of major city financial centers. It’s becoming obvious to me that Obama wants a groundswell of violence to spread far and wide enough to suspend the Constitution and declare Martial Law.

The election set to remove Obama would be jeopardized, delayed and perhaps deemed by the new occupation as unnecessary and dangerous to government operation.

The declaration of Martial Law will cause millions of Americans to react by waging war against the Obama Administration and their supporters. What we will have is a full Civil War and total anarchy.

Obama will gamble that his army of Entitlement Zombies, African-Americans and Socialists will murder enough civilized Americans loyal to the Constitution and the American way of life to succeed. If that is insufficient Obama will bring in foreign troops from Socialist nations to assist him in his coup d'état.

Let me say we elected a stranger with a Socialist rather than traditional American loyalty to our heist office. His oath to protect and defend or Constitution was nothing less than a giant fraud. He’s very citizenship remains a mystery and the radical Communists that he has surrounded himself with should make the actions I expect from him a surprise. God help us all.
Posted by Paul Huebl Crimefile News at 10/07/2011 08:36:00 AM

Unfortunately, we have another year of this and the anarchy has just begun.
He blames the Republicans for everything and when his initiatives are questioned by his opponents, it's more of a, "let it be on your head" kind of attitude. I don't know why so many people fell for this hope and change crap. The man is an arrogant, corrupt, socialist with no skills to get this country out of it's biggest slump ever.