Government Tyranny Has Not Stopped Terrorism 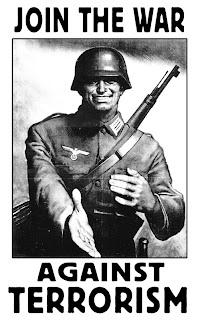 Washington, DC—There are terrorists in our world but your chances of being a casualty have always been more remote than being struck by lightening.

The TSA and the billions blown on crap that does nothing more than fill political campaign coffers with contributions from government contractors. The TSA has not stopped a single terrorist attempt but more than once alert and brave airline passengers have.

We have allowed the Congress and various state legislatures to trade our hard won liberty for the illusion of security. That also comes with a staggering price tag for taxpayers.

What we’ve done is to invite government tyranny which is much worse that the terrorism and they enslaved us to pay for the police state we allowed them to create.

The Patriot Act violates our privacy as the FBI and BATFE has routinely engaged in despicable criminal conduct such as the deadly, Fast and Furious and Gun Walker scandals.

Have we have forgotten how government thugs waged war on the Branch Davidians because they peacefully exercised their Second Amendment rights at their house of worship in Waco, Texas? The phony tip that they had an unregistered .50 caliber machinegun was never substantiated. Our Government murdered scores of men, women and children. Calling the shots of the Waco Massacre was none other than Eric Holder.

The TSA bureaucracy is truly a meaningless exercise since terrorists with either a boat or a truck could launch a small ground to air missile targeting our commercial aircraft at low altitudes during takeoffs and landings. That’s precisely what happened to TWA Flight 800 off of New York. The Clinton Administration covered that up to avoid giving credit to our Muslim enemies.

We have to say no to Barack Obama and his Chief Liberty Hater, Janet Napolitano. We must do whatever it takes to win back our stolen liberty. The problem is history says that can’t be done without some serious bloodshed. If that’s what it takes, so be it.

Dont forget Randy Weaver and what the Clintonistas did to his family.

The government and it's masters at the Federal Reserve have done more harm to this country than any muslim terrorist could ever hope to do.