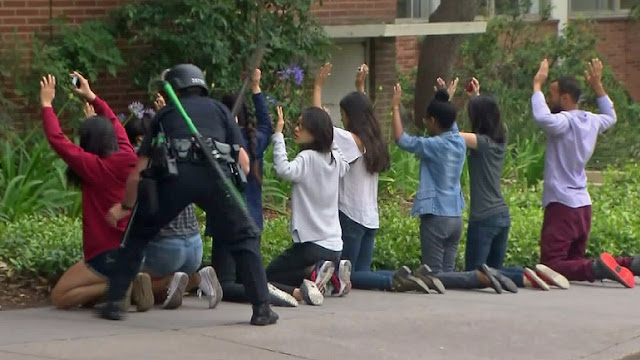 UCLA Police officers immediately responded to a shooting scene and found two dead males.  They appeared to have suffered fatal gunshot wounds from a low powered handgun and a recently fired 9MM pistol lay nearby.  Additionally there was a suicide note that made this somewhat clear to be an isolated Murder/Suicide event.  What followed was nothing less than what we’d expect from an out-of-control fascist government.
The authorities turned this into a massive training exercise that disrupted and disturbed the entire region. SWAT teams were summoned from every department surrounding the area.  FBI, Homeland Security and the BATFE joined in the raiding party.

A chance to test their inter-agency radio communications crossing every jurisdictional line under a single command structure was fully exploited.

UCLA’s Bruin Alert system told the students to shelter in place setting off panic.  The students attempted bizarre efforts to lock classroom doors that had no locks.

I saw perhaps 40 police vehicles speeding with emergency lights and sirens headed for UCLA from the San Fernando Valley along the crowed 405 Freeway. It’s easy to assume that the every major street leading to Westwood saw similar activity.

Students were removed from buildings at gunpoint, forced to raise their hands, submit to unnecessary humiliation as the were frisked like criminals in front of news cameras.  Then the hapless students were then forced to kneel on the ground.  This while the police were assigned to search for “Active Shooters” throughout the campus.  Needless to say none were found.

Hours later police officials declared the exercise over saying it was indeed an isolated Murder/Suicide. Then the media wasted no time heaping on the praise of how wonderfully the police responded protecting the students and faculty at the University.

Adding insult to injury politicians began demanding more gun control. California’s gun laws are the most restrictive anywhere and UCLA is a GUN FREE ZONE! They somehow want to believe that gun laws are obeyed by criminals. Gun laws only impact the law-abiding obstructing their ability to defend themselves.  Liberals always embrace full government dependence, rejecting any form of self-reliance.

Was the UCLA police “Active Shooter” raid just a rehearsal for bigger things yet to come?  Will we see bucket helmet, jackboot wearing armed thugs marching through our businesses and homes?  The sad answer provided by world history is yes unless we demilitarize the cops while we still can. We need to see police returned to their communities as local protectors not an invading army.  Freedom is not free we must fight for it.
Posted by Paul Huebl Crimefile News at 6/02/2016 08:40:00 AM

Is it possible the UCLA Police response was a message to the fragile students and staff, the parents and the media that the UCLA Police can handle anything that comes along, in other words a preemptive press release. When events like this occur the media always speculates and stirs the pot. And you know, academic environments are especially fragile. Save the babies!
Students and faculty lives matter. https://render.bitstrips.com/v2/cpanel/8398487-126845178_2-s1-v1.png?palette=1

Thank you for this cogent statement which echoes my sentiments. It needs to be put out there and you do it well.

Paul, yeah. The whole trend of police militarization and the fear-driven authoritarian response to 9-11 spells serious trouble for civil liberties in the USA. Kind of makes me wonder if the authorities forgot the people who attacked us were foreigners ... not US citizens. Regards --