Another Terrorist Attack, But Will We ever Learn? 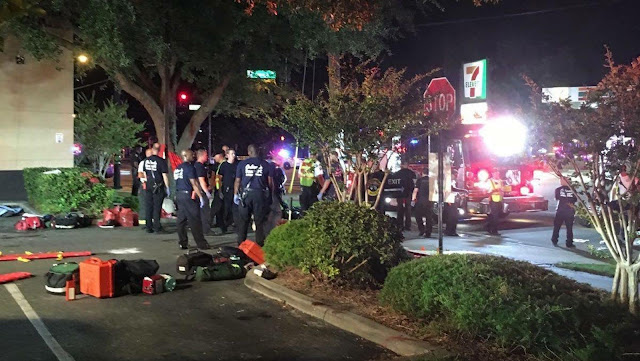 Orlando, FL--In light of another mass casualty shooting this time in a crowded Gay Bar we have little choice but to plan ahead for more of the same.

Our ignorant politicians nearly always respond to this kind of threat with every type of failed gun prohibition, TSA style checkpoints and of course those Gun Free Zones.

We've learned on thing we can’t deny.  Nearly everyone of the active shooter events are stopped either by gunfire by a good guy or suicide of the gunmen. The are only stopped by the type of force they inflict on others.

As for the TSA style checkpoints at venues, they are a total farce.  Putting unarmed, untrained, un-vetted marginal people in pseudo police uniforms to stop terrorism is laughable.  Additionally this type of faux security makes a mockery of our Fourth Amendment rights to be free of unreasonable searches.

Any determined armed terrorist/criminal need only display their weapons to totally defeat these search gauntlets. The crowds of people waiting patiently to have their privacy violated are certainly ripe targets for mayhem.

Shopping malls, sports arenas, theaters, schools or any venue must have a workable and realistic plan. The failed Monkey See Monkey Do response is simply no option.

Our cops can’t do this alone.  They're not enough of them, nor can we afford sufficient numbers of them to make a difference.

We have already in place a huge force of vetted Concealed weapon License holders. They are our veterans, ex-cops, well-trained and trustworthy civilians.

We need to open our arms to these folks inviting them to bring their weapons and courage to our venues. Somehow we've not learned that gun prohibitions only impact the law abiding folks and never the criminals.

The right to keep and bear arms is here and is not going away any time soon. Frankly the idea of that right was to allow for better public safety.

No matter where we stand on guns and gun rights we all claim the same desire to end murder and mayhem. We have failed with the old ideas and new it’s time to try something that works.

The obama Administration is loaded with Al-Khaida and ISIS Operatives. More and more flooding into political/Government Positions across the Country. We are being taken over from within, and it is well past the point of being able to be rectified via conventional means.

These events are always full of hired character actors for such staged events.
Look at the 'crying' woman interviewed on ABC. No tears, incessant rambling
(Bad script reading) and she's calling for getting rid of our guns (assault rifles).

It's the exact same M.O. we've seen before.

One shooter is now 3 or 4 shooters / accomplices.

Why did the 911 hotline call records for the OFD FROM 12am to 3am get purged from
their records system?

Why were there no ambulances onsite for hours?

This is just the tip of the iceberg so far.

The bottom line is that it is another attempt to take our only means of protection from us - our guns.

Be alert my friends.

Not under the current admin or bammys third term(Hillary).They want a Socialist Utopia for the connected juiced up crowd.