Martial Law, you, Cops and the Military. 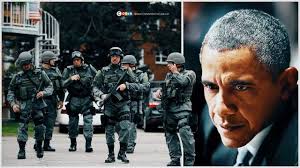 Washington, DC—Only Farmers, the well armed and the prepared have a chance should things get out-of-hand.

This divided nation has huge challenges ahead.  The political Left wants total domination over this nation and will stop at nothing to achieve a totalitarian Marxist state.
The summer promises to have intense racial conflicts not to mention the hostile pre-election political climate.

Should Barack Obama declare Martial Law our cops and military will initially balk.  The real muscle will surface when food shipments to major urban areas is interrupted.

The moment they cut cell phones, power and water to our homes citizens will begin to gladly board buses to be delivered to FEMA camps.  They will direct us at least until the power to our cellphones fails.

As for the cops and military we need only look at history.  The despotic leaders like Hitler and Stalin simply allow these public servants to keep confiscated property including homes and businesses.  Total corruption will rule.  Yes, much of our military and cops will fall to do the devil’s work.

There is only one way for Americans to end such a conflict.  The homes and families of every Leftist politician must be quickly located and attacked.  They are the only ones that could possibly want a truce. War is an ugly business.

The horror of such a historical event is just a matter of when not if.  History is the teacher.  What plans do you have to protect yourself and families?  Will you trust your government should Martial Law be declared?

Every bad government always promises good things to the people they seek to control.  There will be good food and water for all if you cooperate.  They will promise to return citizens to their homes.  People will always believe what their told as denial because their new way of life.

The second Amendment along with quick and decisive resistance is our only chance to thwart this kind of thing.  The sad truth is that most Americans would march to the ovens rather than to resist. That’s why Holocausts happen throughout history.

I believe that a breakdown of our country is a real possibility. I tell everyone in my family to get three months of food and water in their home ASAP.

Rule number one, ACT ALONE tell NOBODY, EVER. Don't say cutesie innuendos at the bar.
Plan. Make it quick and decisive. Know the risks. Do it. Shut your mouth. Repeat keep your mouth SHUT. Conscience may bother you on occasion and give you doubt about your actions. Ignore it, it'll pass. Remember you did civilization a solid.

There are 340 Americans in this country.half of them are armed.