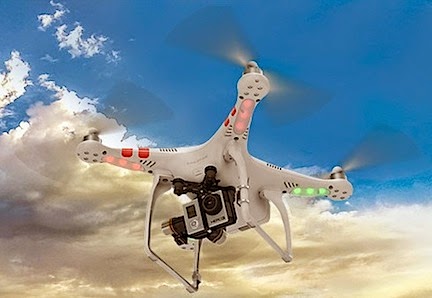 Los Angeles, CA—As a long time photographer, licensed private investigator and television journalist I have to weigh in on drone regulation.
For me it all began for me as a Chicago cop long ago.  I’m also a Viet Nam Era veteran.
First of all there are no recorded deaths from the consumer drones that photographers are using.  Injuries and property damage has so far been so insignificant as to be totally off the radar.
Our drone cameras are no different that your cell phone cameras.  You have to get really close for a recognizable face shot.  The cameras drone operators are using are not suited for such portrait photography.   Privacy concerns are way over-rated and are only a figment of paranoid imaginations.
Our drones are electric and are not capable of making noise disturbances.
Yes, drones can be misused just like rocks, scissors and paper.  You can make a weapon out of anything and cause damage or harm.  Our simple drones are not weapons. Using a drone to commit or facilitate a crime is and will always be a crime.
All of the needed laws are already in place and have been for a very long time.
We only have privacy rights in places where there is a reasonable expiation of privacy.  Despite the NSA inside our homes and businesses we are protected from spying by law.   Stalking, harassment and disturbing the peace laws already apply to everyone including drone operators.
Assault, manslaughter, and endangerment laws are on the books everywhere.  Reckless behavior with a drone or in any other way is already a crime.   Flying a drone in the near vicinity of manned aircraft would be a crime under state and local laws everywhere.
Suddenly  I see drone operators fearing bans suggesting compromising our legal ability to fly our drones such as where people exist.  There is just no basis or justification for that kind of restriction based on the fact that there are no deaths or injuries happening.
These drones were considered toys until they were married with the tiny cameras such as the GoPro.    Suddenly drones became the subject of over-imaginative conversation and news stories.   People are going overboard and believe that we now somehow need new bans and laws.
Drone operators need to vigorously fight for what few rights we have left in America.
The new drone journalists should be allowed to cover news like they are with pencils, typewriters, computers, and conventional cameras.  Camera drones are legitimate news gathering devices and should be fully protected under the First Amendment.
We must never forget that conventional aircraft and helicopters used by news kill people every year somewhere.  Drones are so much safer for newsgathering not to mention only a tiny fraction of the cost.
The FAA needs to focus on their current aviation duties.  They want to expand their bloated bureaucracy to cover every 12 year-old boy with a remote controlled aircraft.  That’s just plain nuts!
Here is a little video I created with a Phantom 2 drone with a GoPro 3+ camera at Carmel-By-The Sea.

Hi, couldnt agree with you more. We in the Uk are only starting to hit these so called'problems', its ludicrous