The Sad Ending of My Quadcopter Drone Spycam 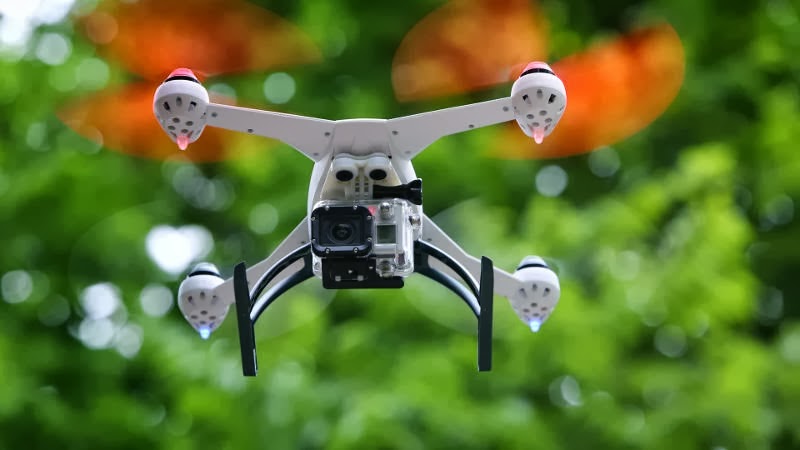 Los Angeles, CA—I thought I learned how to fly my new Blade 350 quadcopter very well.  It was now time to shoot some cool video over the trendy UCLA neighborhood of Westwood while I was in town.  I wanted video of the old movie houses and such from not so high above.
I carefully placed and set up a brand new GoPro 3+ camera on the gimbal and sent the drone all over the area for nearly 10 minutes.  I landed it perfectly and changed the battery sending it up to the Western sky.   I sent it up really high and unfortunately this time directly into the sun.
I was completely blinded and I maneuvered the control to the North.  However I completely lost sight of it and the advertised return home feature failed miserably.  It simply vanished from view.
The little drone should have flown until the battery discharged and the thing would have slowly descended until it made a soft landing, but where?  I don’t have a clue!  A rooftop?  The VA Cemetery?  Did it land on busy nearby street or sidewalk?  Is it somehow on the roof of the FBI building?
To me this major mystery is nearly as important as the 1937 disappearance of Amelia Earhart her navigator Fred Noonan along with their Electra plane somewhere not far from Howland Island.
I did not place identification or a phone number on it so it is lost forever.  The camera and the 64 gigabyte SD Ram card long with the drone cost well over $400.00 and the device itself $650.00.  Then there are the tools and accessories I bought that will now remain idle.
More that anything I want the contents of the GoPro’s SD Ram card.
Oh well it was fun while it lasted! I am incredibly sad right now.


Update:
I began to analyze what went wrong and how I should have handled the emergency mid flight.   In retrospect I should have been able to avoid the panic and loss of the aircraft.
First and foremost, when the sun blinded me, I should have simply let go of the controls and it would have hovered in place.   I would have had at least five minutes to think up options.
I could have moved the thing a bit to the right or left and let go of the controls again until I could get a visual on it.  Then I could have finished my flight without the drama and heartache.
The cause of this air disaster was pure and simple pilot error.  Inexperience and over-confidence is a killer!

More that anything I want the contents of the GoPro’s SD Ram card.

I found a 350 QX Blade on one of the rooftops alongside Westwood Blvd.It has a GoPro Hero +3 camera. Also, a little strip of duct tape around the sensor on one of the landing stands. call me at 323-420-8836. A reward would be greatly appreciated