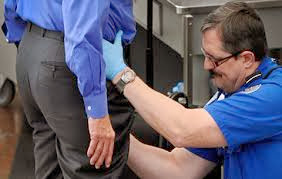 Los Angeles, CA—What to you call a sinking boatload of TSA bureaucrats and screeners?  It’s an excellent beginning!   Do I absolutely abhor the TSA?  That’s an understatement at best.  When I see them in their quasi police costumes I always view them as nasty Nazis.  They are simple minded, poorly trained goons that lack minimal tolerance for anyone or anything. Too many of them are thieves stealing valuable passenger’s property every day.
Factually, the TSA’s totally tyrannical mission is a violation of travelers Civil Rights under the Fourth Amendment to the Constitution.  The courts have wrongly held that travelers “voluntarily submit” to the searching and that somehow justifies the privacy invasion and seizures of property.
I say there is nothing voluntary about most people traveling by commercial airlines.  Americans must travel in order to earn money to feed themselves and families.  There really is no alternative.  Millions of people do avoid flying whenever they can because of this government tyranny and I’m one of them.
I’d rather drive up to eight hours each way on highways to avoid the indignity of being X-Rayed, fondled and frisked by these low rent TSA thugs.
My biggest beef with the TSA is the 1,700 times a year or more that they cause the wrongful arrest people that simply forgot they had legal handguns in their carry on bags.
Before you say these forgetful people are stupid or criminal consider the millions of dollars of lotions and potions seized from passengers that forgot they had their expensive liquid cosmetics in carry on bags.
We all forget especially when we must fly at the last minute and become preoccupied with serious business or personal matters like traveling because of the deaths of loved ones. We are humans and humans forget.
We place our bags on the conveyer belts knowing they will be X-Rayed and inspected.  Nobody would knowingly leave any item in such a bag that would cause distress to fellow passengers or anyone, especially themselves!
Often our bags are shared with or packed by our close family members increasing the likelihood that a gun could be left in some carry on bag.
When the TSA discovers a gun they contact police who are forced to arrest, the poor forgetful soul and what follows is never pretty.  They confiscate the gun that can easily cost upwards of $1,100.00 and then the arrestee is fingerprinted, photographed and jailed until they see a judge and post bail.  They must then hire a lawyer that can cost $10,000 or more.  If they have a business license that face more trouble after they are placed on probation or pay fines.  The criminal record in most jurisdictions is forever.  All for just being forgetful!
The late actor and retired police detective Dennis Farina was handcuffed and jailed on a Sunday for over eight hours until he could gather $35,000 in cash for bail with the banks being closed!  His record was eventually expunged but he was treated like a common criminal that had committed some dreadful offense.
Celebrity chef Paul Prudhomme, NBA legend Bill Russell, actor Christian Slater and the wife of Rocker Ted Nugent, Shemane Nugent just to name a few more victims were all arrested and manhandled because of the outrageous TSA Zero Tolerance policy.
TSA head, John Pistole (no pun intended) recently conceded to ABC News that people arrested with guns in carry-on luggage are not terrorists or people trying to do harm.  He went on to say that, “ It’s just a matter of people not thinking about what they’re carrying… These are people who have simply forgotten and go through security checks and realize their mistakes.”
If the TSA is well aware that there is no criminal intent than why don’t they simply ask the passengers to remove the guns and place them in checked baggage the proper way? Why subject the forgetful passenger to the horror of jail and criminal prosecution?  Why waste so much taxpayer money on this tyranny?
Should a few guns turn out to be stolen, have obliterated serial numbers or are being carried by felons, that is an entirely different matter.  Arrests under those circumstances are good public policy.
In short if the TSA could show simple reasonableness and respect I would not want to see them all on a sinking boat.  They must realize their mission is to protect passengers from actual terrorists.  Instead the TSA itself has become a terrorist organization.  If they ever expect to gain my tolerance and respect they must first learn that forgetful passengers are not America’s enemies.

Excellent post. I agree that the TSA could do themselves much good just by using some common sense and discretion. Zero tolerance about anything is bad policy.