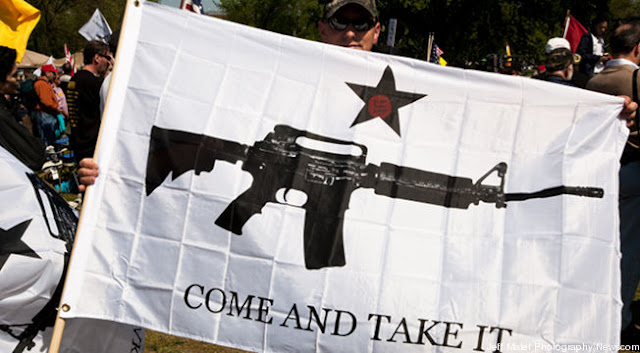 Las Vegas, NV—I spent some quality time with an incredible assortment of firearms of every type here at the SHOT Show.  When that ended the very upscale Las Vegas Antique Arms Show at the Rivera Convention Center was my next stop.  Between the two shows there were nearly 100,000 people.  There were no assaults, accidents or even disturbances of any kind.  Crime takes a holiday in Las Vegas with all these gun-packing visitors.
The mood at the shows was angry and even confrontational about suggestions that liberty and freedom be compromised away or surrendered for the bogus promise of public safety.
Today's Americans are more educated than ever about gun rights and why we have them in the first place.  The Second Amendment guarantees our right to keep and carry firearms.  It exists to fundamentally allow Americans to use force and violence against anyone trying to violate those Constitutional freedoms!  That simply means politicians, bureaucrats and their agents may lose their lives should they try and make an end run around liberty or freedom.
There is a proper political method for taking liberty or freedom by way of a Constitutional Amendment.  The process was designed to be very difficult to protect even Americans with minority concerns.
Too many Americans are totally ignorant and believe that a simple 51% majority is enough to restrict our hard won freedom.  Of course Europeans that don’t like our gun freedom don’t understand why changing our Constitution was designed to be so difficult.
The consensus among those that don’t like our gun rights is that the Second Amendment is somehow outdated.   The Constitution is the Law of the land and the emotional response, whims or tyranny of our politicians cannot lawfully bring infringement on our rights to possess and carry firearms.   So-called, good intentions simply do not justify or authorize violating American’s rights.
People and politicians love to compromise their way to agreements.  Over recent decades many Americans have grown to accept blatant violations of the Civil Rights when is comes to firearms.  That however does not make the past infringements legal!
We did not create a right to keep and bear inferior or ineffective arms.  Our founding fathers did not open the door for Gun Free Zones or a way to monitor and spy on gun owners through bogus registration schemes.
Politicians have managed to lead so many Americans to believe that possessing or carrying firearms is a tightly restricted privilege rather than what it really is, constitutionally protected activity.
Restricting the ability of Americans to buy guns in their state of residence, forcing them to pay fees or register themselves like sex offenders or their guns like motor vehicles is simply government tyranny.
The U.S. Supreme Court decisions made in the recent Heller and McDonald cases made it clear that Americans have the right to keep and carry guns for defense of self, family, neighbors and country.  States and local governments are absolutely forbidden to infringe on gun rights under the Fourteenth Amendment.
Frankly the politician’s using the threat of force and violence against Americans in efforts to infringe on their gun rights is treason, tyranny and criminal.  The Second Amendment was created for just the state of siege Barack Obama is trying to assemble.
The Americans I talked to attending the two huge firearms shows made it clear that they have amassed more firearms and ammunition to violently resist any additional infringements on their rights to keep and carry firearms.
These same people I talked with began efforts or have organized in their own community to violently swarm any federal, state or local agents raiding their fellow gun owners.  They have vowed to stop cold any raids like the ones we saw against Randy Weaver or the Waco Branch Dravidians.
The law of the land does not allow for politicians to decide what freedoms they can take from us.  On the contrary that law of the land allows us to resist their tyranny.

The Spartan King Lionidas said it all when the Persian king Xerxes ordered him to lay down his weapons. Lionidas said "Molon Labe", which translates as "come and take them". The current government in this country, who's leaders style themselves as kings of an imperial executive branch, need to hear the people say, you want our guns, well "Molon Labe".

They think they can get away with banning guns, or forcing registration, or even requiring every free man to beg permission before he trades a piece of personal property. They have no idea how badly they have misjudged the resolve of the Free People of These United States. They have no idea how bad this will turn out for them. They have no foresight that the coming confrontation will bring about the collapse of their Grand Socialist experiment.

As was said before Molon Labe! Or more appropriately, Jim Bowie's reply.

Sorry to be an ignorant foreigner , but I have to ask you what was Jim Bowie reply and to whom ?

"The Second Amendment guarantees our right to keep and carry firearms"

This is why most are afraid to discuss the meaning of the 2nd Amendment.Its very clear what the founding fathers meant,lots of evidence to support it.

If we allow the courts and govt to dictate what we can have,we are not free.

If governments always did things legally, logically, ethically, and in a consistent and sensible manner, how would people ever learn that the ruling class is scum?

As it is, government is not logical or ethical or sensible. It's consistently indulging in imperial overreach - thus teaching Americans again and again that the rulers are never to be trusted. Just as Proudhon put it many decades ago:

"To be GOVERNED is to be watched, inspected, spied upon, directed, law-driven, numbered, regulated, enrolled, indoctrinated, preached at, controlled, checked, estimated, valued, censured, commanded, by creatures who have neither the right nor the wisdom nor the virtue to do so. To be GOVERNED is to be at every operation, at every transaction noted, registered, counted, taxed, stamped, measured, numbered, assessed, licensed, authorized, admonished, prevented, forbidden, reformed, corrected, punished. It is, under pretext of public utility, and in the name of the general interest, to be placed under contribution, drilled, fleeced, exploited, monopolized, extorted from, squeezed, hoaxed, robbed; then, at the slightest resistance, the first word of complaint, to be repressed, fined, vilified, harassed, hunted down, abused, clubbed, disarmed, bound, choked, imprisoned, judged, condemned, shot, deported, sacrificed, sold, betrayed; and to crown all, mocked, ridiculed, derided, outraged, dishonored. That is government; that is its justice; that is its morality."

Just a note on unalienable rights, of which the right to keep and bear arms is one.
If the state, or the majority, were allowed to ammend the Constitution to do away with the Bill of Rights, then by definition the rights would not be unalienable.
The only method for taking rights is through deceit, and force. It is our responsibility to maintain a free state.