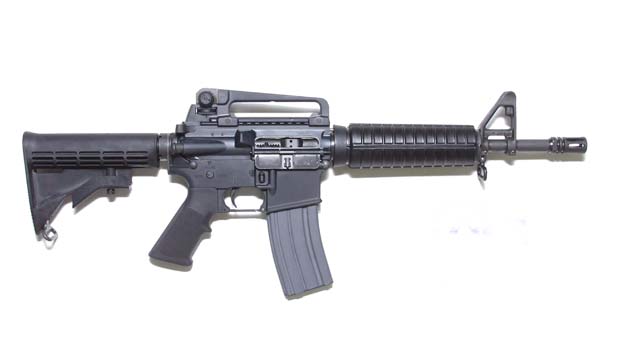 Washington-DC—The latest political assault on gun rights seems to surround this rifle platform more than any. However they are planning to ban millions of other handguns, rifles and shotguns along the way.  Ignorance and stupidity is leading the gun banners and grabbers in the wrong direction.
The AR-15/M-16/M-4 is essentially the same short rifle or carbine.  It fires a miniscule .223caliber/5.56 MM cartridge.
The already banned military M-16/M-4 assault rifle versionis fully automatic is not part of this argument.  The military version was designed so that the user could pull the trigger once and fire two to three rounds.  Holding the trigger back would of courseallow a machinegun type burst of fire until the magazine of up to 30 rounds went empty. However the barrel would be quickly destroyed by heat with thiskind of fire.  This little rifle was onlydesigned to fire the short bursts doubling or tripling the likelihood the target would be hit.
The cost of ammunition is very high and any normal machinegun firing would quickly send all but its wealthiest owners to the poorhouse.  Even for the emergency of self-defense, slow and deliberate fire is the best way to effectively fight for your life.  Spraying lead and praying forhits is no help in any firefight.
This rifle platform was a suitable weapon for close range jungle combat such as we had in Viet Nam. No heavy armor to penetrate or substantial building materials werepresent in most of Viet Nam to defeat this tiny round of ammunition.  The other advantage was that soldiers couldcarry more ammunition.  In most urbansettings building materials and light armor can easily stops this round.
The civilian version this is a semi-automatic rifle that canonly discharge a single round for every pull of the trigger.  For deer hunting this is a horrible roundbecause it is much more likely to only wound and make the animals suffer.  The ignorant politicians and media insist onhyping this little rifle as a so-called “high-powered weapon of war”.  It’s really better suited for small game likegroundhogs.  By the way, since this is only semi-automatic it is NOT an assault rifle!
The little civilian, semi-automatic carbine is great forsimple close range, self-defense.  It’seasy for training purposes and it’s looks are incredibly intimidating to thepoint of misleading the ignorant that don’t know better.
A much more suitable military rifle cartridge is the standard  .30 caliber, 7.62 MM X 54 NATOround. It’s used for deer hunting, military combat and sniping operations.
The 7.62 round itself has substantially more gunpowder and lead!  The M-14 platform was a superiorweapon for combat.  The rifle is heavierand makes troop movements slower and more cumbersome for the physicallyweak.   The round penetrates armor alongwith building materials and it will dispatch enemy soldiers or criminals in ahurry.
For me I much prefer the M-14 platform or the more expensiveand substantially classier FNFAL rifles. They both fire the 7.62 MM NATO round.
If we have another Civil War, our civilian resistance willoutgun government agents because they will have many more, larger hunting stylerifles.  Well-placed shots from America’scivilian bolt action and scoped deer rifles will far outgun the M-4 carbinesissued to any force sent out to confiscate firearms.
We were not given the 2nd Amendment to keep andbear inferior or ineffective firearms. We were give this right so we could resist tyrannical attempts to disarmus.  Are they going to wage war againstgun owners?  They can count on anunnecessary bloodbath.  We will tolerateno more Wacos or Randy Weaver assaults. The Gallows await the despots!

The NATO round is the 7.62x51. The 7.62x54 is for the Soviet Dragunov. I agree with what you are saying. For most applications a good 7.62x51 or the grand garand in 30-06 are the better cartridge. Most folks though are not good shots. Anything beyond 100 meters would be a stretch, and in those situations, short range, the 5.56x43 works quite well. I like my M1A. It has power, long range accuracy, and a nice feel to it.

The .223 is perfect for the under-trained mass-fire shooter. It makes an impressive bark-zing and flash. The light weight makes for a lot of bangs per pound.

Agree completely that an M-14 or FAL are better weapons for accurate 500M hits because the energy delivered at range is still enough for a one-hit stop. 5.56 from an AR-15HB is accurate as heck and wins matches where paper-punching is needed.

I am reminded of the movie "V for Vendetta"

Paul said,"We were not given the 2nd Amendment to ...bear inferior or ineffective firearms. We were give this right so we could resist tyrannical attempts [by Government or other factions]to disarm us.

Are they going to wage war against gun owners? They can count on a... bloodbath. We will tolerate no more Wacos or Randy Weaver assaults. The Gallows await the despots!"