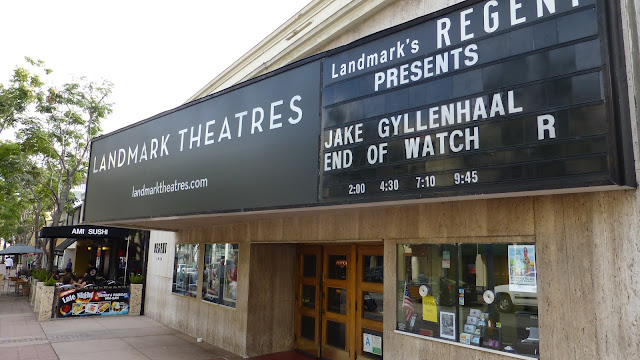 Los Angeles, CA—Where better than in the City of Angels could it be to see a film about LAPD cops?
I have to warn you that this film is very violent and may give sensitive types, Post Traumatic Stress Disorder.  The title says it all.  End of Watch or EOW, is standard police jargon to signify an officer’s sudden death on the job.
The film is gritty and from the point of view of cops armed with various high definition video cameras and well as their sidearms.  Most of the video is shot with handheld cameras rather than using tripods.  It’s like the TV series COPS but on steroids.
This story centers around two young cops in the very busy Southwest Division of the LAPD.  These two lads are just starting families and their spouses are no small part of the film.
This was written and directed by, David Ayer.  The writing, directing, acting and casting are as good as it gets.  You will immediately fall in love with the teriffic smile of actress Anna Kendrick (Janet) as I did.
The two co-leading men are Jake Gyllenhaal (Brian) and Michael Pena (Mike).  The second wife is Gabby is played by Natalie Martinez
When I say the film is violent and often heartbreaking it is indeed.  I don’t care how tired you are you’ll never doze of during this film
It compacts all of the most violent events of lets say a 15-20 year career in a busy police district just into two hours.
The cast and crew have captured the personalities and attitudes of real cops and there spouses.   Of course the use of cop’s personal cameras would be frowned upon in a big way, but times and technology are changing at breakneck speed.  Many cops whip out their IPhones these days to capture the some of the amazing images they come across.
My cop friends and readers  will enjoy the film and many will relive similar events of their own careers.
Anyone applying for a police officer’s position after seeing this film should be carefully examined for obvious mental defect.
Here is a trailer for End of Watch:
Posted by Paul Huebl Crimefile News at 9/22/2012 06:42:00 PM

Any one looking at police work for job needs to flush out their head gear.Its only for the politically protected types.Education and training mean nothing.Only phone calls.
Get a real job.