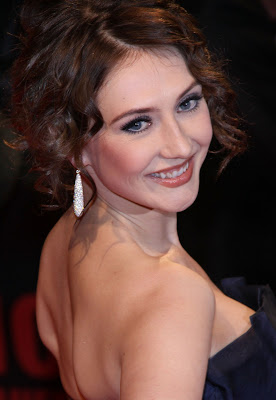 Amsterdam, The Netherlands—In this incredibly beautiful city there is no shortage of art, entertainment or excitement.  It’s a natural place for the terrific actress, singer and world-class entertainer, Carice van Houten  who is a child of Holland.
I fell in love with Carice’s many talents when she starred in the Paul Verhoeven Film, Black Book.  I expect this incredible and exciting young woman to be getting an Oscar bound film role any day.
Carice completed a brand new album, See You On The Ice which is due to be released on ITunes on September 28.
Carice was a guest on a Dutch DJ’s radio show and sang two selections from her album.  This sneak peek was a real treat for me to watch and now I must pass her on to you!

At the very top of my Bucket List is winning a video interview of Carice for this blog! Somehow I think that will happen when I'm in Amsterdam or Carice is in L.A.
Black Book is available on Blu-Ray at Amazon.com.

Paul, thanks again for letting us know about this little Dutch cutie!

Very easy on the eyes and a nice voice... She looks just a little hungry though! (^: I''ll cook up something nice...