Why Barbara Graham was executed in California’s Gas Chamber

Burbank, CA—Mabel Monahan a former pro-roller skater who had been disabled but was living out her retirement in a nice Burbank home located at 1718 West Parkside Avenue in Burbank, CA.
30 year-old Barbara Graham was a very pretty but troubled gal who came from Oakland, CA.  Graham was raised in really crappy conditions and often often by strangers.  Her education was somewhat marginal.
Back then being homeless was a crime called Vagrancy.  That was her first offense and Graham was jailed at the Ventura State School for Girls.  Graham’s own mother also once did some time there.   Later Graham also did a prison stretch over a perjury beef while trying to help a friend in trouble.
Back in those days there were no birth control pills and abortion was a serious felony.  Graham unwisely married three men, had a child by each.
Everyone treated single mothers of that sad era very poorly.  Their job prospects were limited greatly and Graham understandably fell into a life of prostitution, bad checks and the underworld.
Barbara Graham was now 30 years old and married to her third husband, Henry Graham.   He was a drug-addicted bartender who introduced his young wife to his own unsavory friends.  That union was the beginning and end of this tale of despair, deceit and doom.
We know for sure Mabel Monahan was brutally beaten and suffocated to death. We of course can only guess just how that happened based upon the statements of those involved in the killing.
The killers of Monahan, were named in exchange for full immunity from prosecution by a co-conspirator by the name of John True.   True’s self-serving statements sealed the fate of his friends.  They were Barbara Graham along with Jack Santo and Emmett Perkins.
The prosecution theory was that Santo, Perkins and Graham targeted Monahan because of rumors she keep lots of cash and jewelry around her home.
True claimed that Graham knocked on the door and when Monahan opened it all four killers forced their way in to the home.  True claimed that Graham bludgeoned Monahan repeatedly in the head with a gun and suffocated her.
I think it was safe to assume that by implicating Graham is the actual killer that she’d somehow be spared the death penalty.  With luck Perkins and Santo would then be able to mitigate their actions and be spared too. 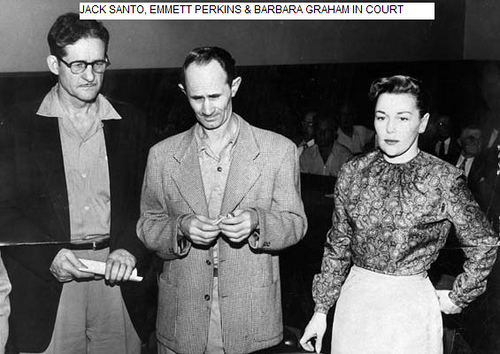 Prosecutors did not have particularly strong case against Graham so they enlisted the aid of a slimy jailhouse snitch and an undercover cop.
They successfully entrapped Graham to put up the cop as a phony alibi witness.  The conversations were surreptitiously recorded and sensationally used against her in the Los Angeles superior Court.  That made getting a conviction much easier.
Graham and her two co-defendants were convicted and sentenced to death.  Appeals in those days went very quick.  Within two years all three exhausted their failed appeals and were executed the same day June 3, 1955 at San Quentin.
Two films were made depicting these events.  Susan Hayward and Lindsey Wagner both played Graham.
The story was told by a hearing impaired, Pulitzer Prize winning investigative journalist, Edward Montgomery who did his best to save Graham’s life.  His reports along with their written correspondence became the basis for the screenplay.
Graham’s horrible life and death was used in a failed attempt to champion anti-death penalty efforts in America.
The death penalty sucks in a big way.  We kill people based on mistaken or perjured eyewitness testimony every day.   The death penalty is a power no government should be able to exercise against its own citizens.
California like many states did not just execute murderers.  Rapists, kidnappers and even horse thieves often faced death upon conviction.  The last convicted rapist put to death in California was Caryl Chessman on May 2, 1960.

I must disagree with you on the death penalty. While I agree it is misused, I feel it should be used in all cases where society would not be secure if the person was released after a term of twenty years as determined by the jury. In my opinion third time offenders should all be executed. If they refuse to conform to the laws of society, exclude them from it. For rapists, murderers and child molesters, no second chance should be offered. A decent appeal and review of evidence can be done in a matter of a few months. Allow the defense the chance to poligraph every prosecution witness and the prosecutor.
too many police and liars err lawyers are looking to put a notch in their grips not seek out truth. Any false conviction should result in the prosecutor or officer who lied being given a free trip to the gallows and a chance to walk on air.

Ashame she was so unwilling from the start to tell the truth,she had a bad lawyer,or lawyers not to pick up on her being left handed,not originally taking lie detector test,and for not having a decent life...and the alibi cop,he should be held responsiable for pushing and setting barbara up ...callus....underhanded trick..what a crime that was.Today it would be different,I THINK,WOULDN'T IT?