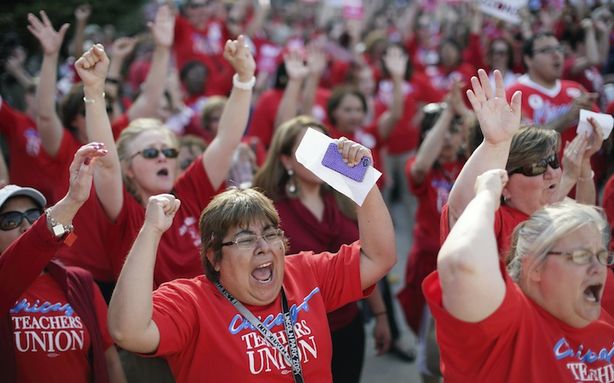 Chicago, IL—Teaching is a noble profession however pathetic politicians, unions and a bankrupt African-American culture has gutted every gifted teacher’s lifeblood.
The Windy City’s children’s lives are devalued and destroyed in the process of Chicago’s political creature’s intentional sabotage of productivity and Capitalism.
There is no room in Chicago’s schools for teachers that will inspire or motivate children to abandon the African-American culture and tradition of idleness, hatred and total dependence on corrupt government.
Chicago’s public school teachers have little success to show because the children never learn even basic communication skills.  It’s obvious by results that the children are simply warehoused in free day care with free meals to liberate their unemployable single mothers from their parental responsibilities.
The children are not motivated or inspired.  That’s because Chicago’s school system has seen to it that teachers that inspire, motivate and liberate children from the chains of dependence are never rewarded over those that do not.
The unions protect all of their dues paying members at the expense of the children.
The fact is that Chicago’s children are no better off attending public schools than if they stayed home watching the likes Jerry Springer, Oprah and Judge Judy on television.
Chicago’s public schools are a sociological disaster in every respect.  Throwing more money at these overly paid, part-time unionized babysitters is, simply a waste.
I don’t blame the teachers themselves because their hands are tied.  The far Left Wing politicians have negatively affected the entire teaching profession in America for the last several generations.
You can defend schools and teachers all you wish but I must ask anyone a simple question.  What percentage of your own teachers personally excited, inspired or motivated you?  The answer is ten percent or less.  I rest my case.

Chicago does not have an educational system.It has the world largest day care operation

Tell us what you really think.

Police lining up already again. If the "edjumakators" don't get what they want they will cry cry cry and make others miserable until they do.

I met a girl from Wisconsin that was down here to get her degree in education. When I found out she went to Chicago State, I stopped being further interested.

Why the hell does a white girl move to Chicago to get a degree in education from Chicago State?

Why the hell does a white girl move to Chicago to get a degree in education from Chicago State?

Do you really want a response from the street wise??

Anonymous said...
Why the hell does a white girl move to Chicago to get a degree in education from Chicago State?

SHE WANTS SOME RADIATOR HOSE