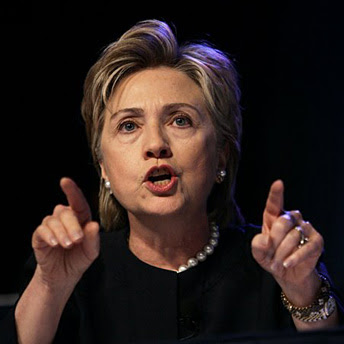 Mrs. Clinton targeted and tried to turn American’s gun owners into criminals. She sought to bring welfare mothers and their children into America’s Veteran’s hospitals under her first un-American healthcare plan. Bigger taxes, bigger government and less freedom, was and is Clinton’s hallmark.

Whitehouse scandals during the last Clinton administration all included questionable conduct by this former First Lady. Her husband has the distinction to be only the second American President to be impeached. Her husband was the only president caught lying while under oath. You may argue that she should not pay for her husband’s wrongs but she never condemned them either.

Yea but; wouldn't SHE have been easier to beat in the general election?
Or perhaps I'm missing the bigger piture!!

If she's elected President, we're all screwed. And that's for real!

I've heard the theory that Hillary would be easier to defeat in the general election. What scares me is that if she gets that close, then something will get screwed up and somehow she'll win. I think it's best to keep her as far away from the nomination as possible, just to be safe.

The old priest lay dying in the hospital. For years, he had faithfully served the people of the nation's capital in Washington D.C. He motioned for his nurse to come near.

"I would really like to see President Bill and Senator Hillary Clinton before I die," whispered the priest.

"I'll see what I can do, Father" replied the nurse.

The nurse sent the request to the Senate and waited for a response. Soon the word arrived; the Clintons would be delighted to visit the priest.

As they went to the hospital, Hillary commented to Bill, "I don't know why the old priest wants to see us, but it certainly will help our images and might even get me elected President. After all, I'm IN IT TO WIN IT."

Bill agreed--it was a very good thing for her campaign once they put out a press release about it.

Finally Bill Clinton spoke. "Father, of all the people you could have chosen, why did you choose us to be with you as you near the end?"

The old priest slowly replied, "I have always tried to pattern my life after our Lord and Savior Jesus Christ."

"He died between two lying thieves. I would like to do the same."