Vester Lee Flanagan, II or Bryce Williams was a Hateful and Racist Narcissist 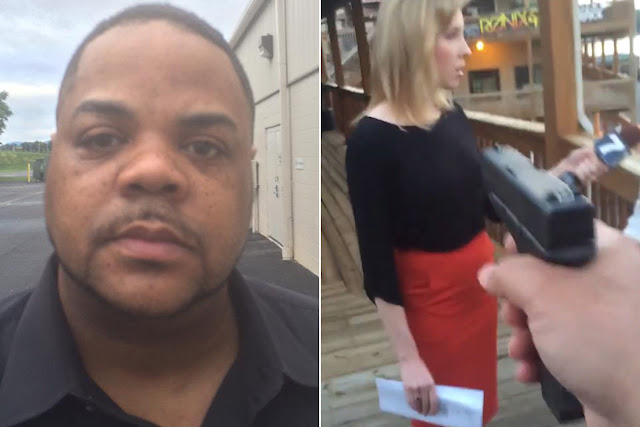 Roanoke, VA—Most of my readers know that aside from being a private eye,  I’m also a freelance investigative TV news producer and have an extensive history working in this field. I’ve been blessed to work with some pretty terrific and talented people over the years.

TV news people are a special breed that thrives on creativity to show their viewers what’s going on in their world.  TV news hires a diverse selection of people where race, gender, sexual preference is controlled by strict efforts to reflect Liberal ideals. They strive to meet strict diversity quotas rather than simply finding the most qualified candidates. Thankfully in the end it all seems to work out.
Saying that I find the minorities they hire to be dedicated and gifted professionals that simply enjoy doing news.  I’ve been on the receiving end of kindness, lifetime friendships and the privilege of simply knowing like-minded people that are different.  We’re not really different because at the end of the day we are all human.
We all watched in horror the endless replays of the live, on air murders of two young members of a smaller market TV news crew doing a routine story yesterday.
Who or what shall we blame?  Political lines were quickly drawn, as Liberals refused to let the victim’s bodies get cold before they beat their Gun Control drums suggesting gun bans would somehow have prevented this.  Really?  From where do those shallow, simplistic and ignorant people come?  Gun rights haters never miss an opportunity to dance on the graves of murdered people.  This is not about guns; it’s all about narcissism, hate and that twisted sense of entitlement.
I think I understand this more than most people.  I’m a white male that never enjoyed that so-called “white privilege”.  I was raised by a variety of caregivers that included my incredibly dysfunctional single mother.  I know abject poverty, evictions, hunger and being embarrassed at school for the large holes in the soles of my shoes.  Necessity forced me to lie about my age, get a job at a local hot dog eatery and an apartment at age 14 in Chicago.   This life experience made me the politically conservative Libertarian that I am today.
If my humble origin sounds miserable and challenging it was.  However it was also an adventure that I survived.  I’ve been blessed with meeting some great friends, mentors and unexpected kindness along the way.  The most important thing I learned is we are not all equal.  Life is not fair and it will never be fair.
Some of us are physically more attractive, richer, smarter and healthier.  Some of us have incredible life challenges and can never escape poverty, hunger, rejection and misery.
Along with other challenges comes hatred and for some the belief that even the most despicable criminal acts is their birthright to address the wrongs in their lives.
Vester Lee Flanagan, II was raised in the San Francisco Bay neighbor of Oakland, CA.  Communists, Socialists and militant Gays politically run this area.  Oakland is the birthplace of the Black Panthers.   Avowed Socialist Jim Jones and his People’s Temple mass suicide infamy began in the East Bay too.
The most hateful and violent African-Americans anywhere can be found in Oakland.  The African-Americans here have morphed into a bankrupt, violent, narcissistic and racist culture.  Children raised here will have challenges far beyond other impoverished Americans. Hate is actually programed into their DNA.
Raising children to avoid personal responsibility and blame anyone or everyone else for failure is the Oakland way.  Using the so-called race card has replaced achievement, competition and positive self-respect.  The males in this society see themselves as race warriors because they’re goaded on and encouraged by local Socialists and Communists.
Vester Lee Flanagan, II somehow got enough education to seek out a TV journalism career.   Like everyone else this lad began but never progressed out of the “training ground” of small market television.  The pay here is low however the opportunity to learn and hone required story telling skills are great.  Reporters learn here and then move up to the next market.
Flanagan never made it out of the TV news minor league.  He failed redundantly because of all the crap he was fed in Oakland. Having a overblown sense of entitlement will never help a reporter or anyone to succeed.  Playing the race card after failure is professional suicide.  Flanagan made himself unemployable.
A very telling sign of Flanagan's lack of even simple TV skills was his own video recording of the shooting.  He failed to hold his camera or cell phone horizontally to properly fill TV screens!
Flanagan snuffed out two promising lives as well as his own.  He changed the life of the Chamber of Commerce woman by shooting her too.  What did Flanagan achieve yesterday?  He gave us more division, hatred and blight.
We as a nation must rise above this and demonstrate simple and sincere kindness to each other.  Is it rally that difficult to treat others they way we want to be treated?  Does race, sex, sexual preference or religion really matter?  We all simply need to toughen our skins to deflect insult and learn how to smile spread a little joy around.
Posted by Paul Huebl Crimefile News at 8/27/2015 05:53:00 AM

While you are telling the truth with the post Paul, your liberal friends are not going to be very happy.
PS. Sorry to hear about your bad childhood. I hate it when kids are abused or neglected. Glad you survived it all.

This guy was a racist coward and I hope he burns in hell. What I don't understand though, is how the reporter, and especially the woman being interviewed, didn't see the shooter in their peripheral vision. I can understand the cameraman looking thru his viewfinder and not being able to see around him. Perhaps if if the two women would have scanned their surroundings a bit this might have ended differently. Not Monday morning quarterbacking here, just wondering. My condolences to the victims of this lunatic.

Ya know what Paul? There are some nut cakes out there that blogging that this never happened, that it was all staged for the sake of control. Unbelieveable!

"Perhaps if if the two women would have scanned their surroundings a bit this might have ended differently."

Experienced interviewers and interviewees learn not to be distracted by such things as it doesn't look good on camera. They would have seen someone in their peripheral vision no doubt but I imagine just assumed it was a messenger or another staff member, etc. No reason for them to break focus and check if it's a gunman coming to kill them.