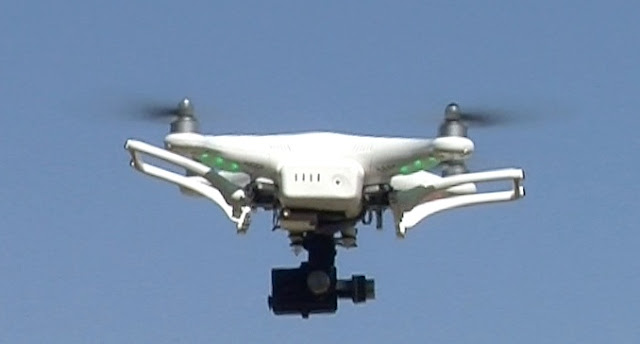 Los Angeles, CA—Many people consider the airspace  above the property that they own or lease is theirs.   Some have actually used firearms to shoot at drones somehow thinking that was somehow justified.
Federal and state laws universally ban shooting at aircraft.  There are heavy penalties for shooting at drones or any aircraft, even UFOs.
Many drone operators operate on ignorance and have bought into the idea that there is or may be private ownership rights to airspace above private property.
The law is simple, our airspace is shared public property.  Exclusively, the FAA regulates aircraft including drones operating in our airspace.
State and local governments cannot make or enforce laws regulating aircraft in our airspace.  Many local jurisdictions have tried out of the simple ignorance of their lawmakers.  Those laws they have already placed on the books are unenforceable due to the FAA preemption.
Have the helicopter and fixed wing pilots ever asked permission to fly over land occupied by people?  We all know the answer to that.
Are those little camera drones somehow different?  Other than they fly at lower altitudes there is no difference.  Okay, the helicopters and fixed wing aircraft carry much heaver and more sophisticated cameras than the little drones.
It would be both wrong and even criminal to use a drone to harass or stalk anyone.  Use of a drone does not insulate anyone from those criminal and civil penalties.
However. flying over property to shoot video or obtain still photographs is constitutionally protected and genuinely established First Amendment activity.
When should you obtain permission?  Flying at or near airports requires permission for obvious reasons.  The same applies to any FAA “No Fly Zone”.
How about your neighborhood?  If you’re standing on property posted with No Trespassing signs or you’ve been asked to leave there could be an arrest and criminal conviction in your future.  Here you need permission.
It will be a lot easier to get if you offered the property owner a copy of or a YouTube link to your work.  Most people would really want to see how their property looks like from your drone.
If your launching your drone from public streets and sidewalks asking permission invites a meaningless refusal and coveys your rights away unnecessarily.  That also sets a bad example and precedent.
Be kind and friendly to those that express concerns about your flying your drone.
I’ve learned that it’s best to fly over residential property during the week when people are at work and commercial property on the weekends when they are closed.
Privacy laws are simple.  We all have a right to a reasonable expectation of privacy provided we are inside our homes and businesses.  Should we decide to skinny-dip in our own outdoor swimming pools there is no longer such an expectation.  Using someone’s image for commercial purposes is another matter.
People have become accustomed to satellite, news choppers, fixed wing aircraft taking images.  Today they think nothing of surveillance video cameras everywhere in populated areas.
The drones are a new phenomenon and a state of Drone Hysteria have taken over some people.  They need to calm down and enjoy the stunning images.

There are drone operators that have appointed themselves as Drone Police and have tried to impose their own ideals on other rather then allowing the law of the land to sort it out.  Unfortunately most of those vigilantes never bothered to learn about existing law and our Bill of Rights.
Posted by Paul Huebl Crimefile News at 8/24/2015 08:15:00 AM

I usually agree with you, Paul, but this one is partial disagreement.

You assert that people think nothing of the surveillance cameras absolutely everywhere. The "lack of response" on these cameras is based in helpless acceptance, not genuine belief that it isn't a violation of privacy.

You discussion of "in their homes" is court precedent material. Many of us would disagree with the courts, as you often do on other matters. Is it "established law"? Well, yes, until it isn't.

The one recent case that I know of wherein someone shot down a drone, the drone was reportedly at eye level, or had been, and as I understand it, even had flown under a patio cover or similar area. Something like that happens at my house, I consider it enough of an intrusion to remove the craft's ability to fly. ...and perhaps have a little impact, so to speak, on its operator. This is EXACTLY what the "frantic" opposers of drones are on about.

You make a good case that commercial FLIR and zoom seem to make GoPros virtually irrelevant. Count on the idea that fishing expeditions and other privacy intrusions of that ilk are profoundly unwelcome by the American People. Do they helplessly accept that the powers that be couldn't care less what the People want? Yes. That isn't acceptance of the idea.

Try it in the UK. wish you luck.

The UK has respect for civil rights like the old Soviet Union. I have no interest in visiting the UK in all of my recent trips to Europe. Possession of a butter knife will get you life in prison there!