There is A Malicious Propaganda War Being Waged Against Multi-Rotor Camera Drones! 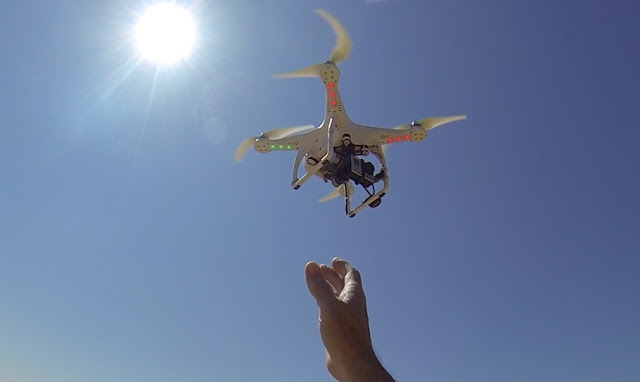 Los Angeles, CA—Officials here recently claimed that drone operators endangered lives by halting firefighting efforts.  Angry local politicians vowed prosecution and new legislation to remedy this “huge and life threatening ” problem.
Photographic evidence supporting those reports is non-existent.  You’d think the crew members presumably are all armed with smart phones would have captured images to help identify the drones to assist investigators.  There are no pictures because this never happened!  Needless to say there are no captured drones either.
As for those helicopter pilots making these reports they seem to forget that their massive propeller’s, prop wash would simply blow any little cameras drones away from their aircraft into oblivion.  A near miss happened? Really?
The high cost of these camera drones makes their owners very protective of their investments.  If they are reckless and crash them, all the the fun is over. Accordingly drone operators police themselves better than any government agency.
New York police helicopter pilots reported a near miss and the follow-up investigation resulted in the false arrests of two youths with a DJI phantom drone on felony charges.
The charges were dropped when the malicious lies of the pilot cops were horribly impeached.  Among things they claimed was the drone was traveling at ridicules, impossible and dangerous speeds when that Phantom could go no faster that 35 MPH.
Cameras on the drones are the ultimate “black Boxes” that document the drones behavior and flight in real time.   The cameras have exposed lies of people claiming their privacy was invaded or lives endangered.  One sad example was the wrongful arrest of David Beesmer who was charged with using a drone to peep into dressing rooms at the Mid Hudson Medical Group building.
Months later after careful examination of the drone’s video debunked the claims of witnesses and ended expensive felony court prosecution.  Bessmer was cleared but only after he spent thousands of dollars for a defense lawyer.
The drone operators I know can't wait to put their flight's video up on YouTube like I do.  It’s about art, fun, newsgathering, real estate marketing or other positive activities. Activities that are clearly Constitutionally Protected!
I use drones for investigation.  Wow! That sounds so ominous!  The reality is that I found that my drone can get great overhead shots of accident and crime scenes to help defense lawyers, prosecutors, judges and juries better see and understand the layout much better than diagrams and land based images.
Drones can't see through window glare, curtains or walls. Surveillance is best conducted with much bigger cameras from conventional places on the ground.  Drones that can transport sophisticated telephoto cameras are simply too cost prohibitive.
You can't get that close up, face shot from more than a few feet away.
I used my drone in a missing person case to examine some rough terrain I was incapable of searching on foot.  I actually found some property that belonged to the missing subject with my drone!
Pilot after pilot has reported near misses with drones.  These sightings all share the same similarities.  Most glaring is there are no actual collisions, videos or still shots of these rogue drones!
The media needs these drones to slow down the rain of pink slips in every newsroom in America.  The single most expensive cost in any TV newsroom is for helicopter newsgathering efforts.
Are these pilots simply seeking attention?  Or could there be something more sinister involved?
One thing for sure drones may not threaten pilots by they are sure to take their jobs away.  Why risk life with manned firefighting planes when drones can do these jobs without risking lives?
News and police helicopter pilots know safer drones that only cost a tiny fraction of conventional helicopters that will be replacing them!  These guys are understandably not exactly cheering on this exciting new technology.
Sadly there are those people that simply see a drone in the sky and can’t resist calling 911.  They don’t report airplanes or helicopters, just drones?  Ignorance, fear and loathing are in high gear spurred on by phony drone misconduct reports getting airtime on TV.
Below is a video that resulted in phony claims to police by a woman that a drone was actually peeping into her single story home’s windows!  Months later the woman apparently claimed she was nearly hit by the drone!  The video speaks for itself and is unedited.  The video is complete from take off until landing but for the addition of music on an audio track.
The police investigation and report actually cleared the pilot but local prosecutors charged him as a criminal anyway!