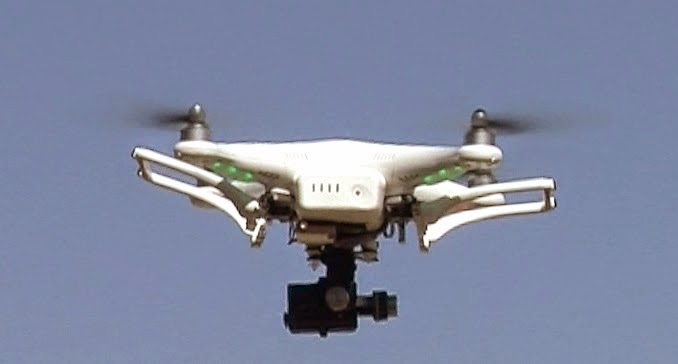 Los Angeles, CA—The redundancy of reported drone news fables claiming privacy invasion and endangerment are getting very tiresome.  Okay, I agree that these stories are still somewhat novel and interesting.
Claims that the little camera drones are nearly colliding with conventional helicopter and other aircraft are nearly always patently bogus.  Careful examination by a journalist would expose the reality from fantasy.
Police and news helicopter pilots see their career days being numbered by the threat of drones eliminating their jobs.  Helicopters cost $1,500 to $2,500 per hour to keep in the air.  The drones cost nearly nothing!
Are the motives of helicopter pilots really pure when they disparage, denounce or otherwise criticize camera drones and their operators?
Can a little camera drone bring down a helicopter or airplane?  I won’t say it’s impossible but it is incredibly unlikely.  There are thousands of collisions between large birds and planes every year.  Occasionally aircraft suffer minor damage but aircraft fatalities or serious air accidents from birds are beyond rare.
The camera drones are zero threat to helicopters. simply because the air movement or prop-wash cause by the large blades would blow little drones far away.
I suppose a drone could be sucked into a jet engine perhaps causing a failure of that engine but causing an actual crash would be very unlikely.
No camera drone operator wants to see his beloved and expensive little toy destroyed.  The same goes for causing any kind of damage or injury.  Flying around conventional aircraft is dangerous but, much more so to the camera drone more than anything.
The safety record of the new camera drones is stellar and spotless.  Zero fatalities or serious injuries.  The same cannot be said about any conventional aircraft or large military drones.
The news media sends out journalists with, for the most part zero experience with these things to cover the “Chicken Little” stories of how bad things almost happened and sensationalism and loathing nearly always sets in.
The same can be said about stories of the little drones invading privacy even though they can’t see or hear through walls or roofs.
The stories of some journalists know no bounds when fictional sensationalism is better than the truth.
There is yet to be one real case of unlawful privacy invasion with a camera drone brought forward in any court.
No industry needs camera drones more than the news media.  Recent financially lean years have shut down newspapers and caused pink slips to rain in nearly every newsroom.
The camera drones produce clear, breathtaking still and video images needed for electronic newsgathering.  News organizations can operate far better with a few camera drones out in the viewer or reader’s neighborhoods than a single conventional helicopter.
Most of America is covered by small or medium market news organizations that don’t now have nor can afford helicopters.  Drones are their obvious answer!
A conventional helicopter, pilot and sometimes a photographer must be quickly scrambled to cover breaking stories.  Then they have to get to the scene and that takes time too.  A drone can be deployed within a minute or three by an operator in the neighborhood.
The media needs to position itself at the very front of the fight with the FAA to use these in the course of daily newsgathering.
There is a 1st Amendment right that also needs to be protected.  The camera drones are no different than any other piece of news equipment such as a pencil, notepad or conventional camera.
The media has to begin factually reporting drone stories taking out the fables and claims that the sky is falling as a result of this exciting new technology.
It’s far easier to win this fight now at the point of FAA regulation and legislation than years of expensive court challenges.
Posted by Paul Huebl Crimefile News at 10/26/2014 03:05:00 PM