Murder Conviction and Sentence of Jodi Arias May Be History 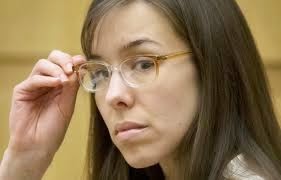 Phoenix, AZ—A major time-bomb of sorts is waiting to go off in the courtroom of Judge Sherry Stephens.  This is in the form of a motion that would remove the death penalty from consideration due to serious misconduct.  The shenanigans and misconduct of cops and prosecutors in this case has grown to fill a massive book.
Judge Stephens lost all control of the the Jodi Arias case from day one.  Stephens has simply turned a blind eye to the misconduct that allowed this murder trial to become one of the more infamous judicial circuses since the Salem Witch Trials.
The latest stunt revealed today was that Mesa police detective Estaban Flores unlawfully shared confidential and court sealed information with his wife.  She in turn allegedly uploaded outrageous videos containing some of the information onto YouTube in efforts to incite public opinion against Arias.
Ultimately, if this is true, Estaban’s police career and peace officer certification is history.  He and his wife probably will now be facing criminal charges brought by an appointed special prosecutor.
As for the Maricopa County Sheriff’s Office and Maricopa County Attorney’s Office,  it seems that they have from the beginning chronically and deliberately obstructed Arias’ right to a fair trial.
Everything from withholding evidence, witness tampering, and obstructed communication with the Arias defense team has taken place.  Of course who could forget the grandstanding circus Ringmaster, prosecutor Juan Martinez signing autographs for his infatuated female court watching fans.
That means there is so much more at stake here than lifting the Death Penalty but outright dismissal is now in plain sight.
No small issue is that Arias has been transformed by a runaway prosecution effort into a reviled pariah.  Current jury selection happenings have made it abundantly clear that the jury pool is hopelessly tainted.
There is no chance that the damage could ever be undone.  There is only one solution now That is setting Arias free and that’s exactly what the law requires.
As for the angry mob of mindless court watchers that have made Arias the object of their intense hate?   They can now transfer their wrath to the brain dead officials that let this happen through their redundant, persistent and chronic misconduct.

The 23 page Motion is attached below:

Well said, Paul! Although, I will be holding off on giving you a virtual fist bump til one of the fat,hateful ladies who harass me on twitter sing! After all, this is Maricopa-Hell-On-Earth, Arizona.

On a serious note, it is a shame such arrogance, recklessness, greed, and outlandishly disrespectful behavior has been allowed to go on for so long.

Not only do I agree with what you stated about the unjust treatment of Jodi Arias, but I also say with sincerity that I find it appalling,and have from day one, that Travis Alexander's nude, deceased body was flaunted all over social media and Maricopa Superior Court by those hoping to incite the lynch mob for their own personal gains.

By the way, it was tweeted that Juan left court before court was adjourned, in a rather brisk fashion and never returned. That's all I know. Maybe you can put your drone out :)

Paul, WTF? You guys like to rip Chicago but it sures seems that Arizona deserves it more than the Windy City as of late.

Good article about how sensational cases are impossible to try under any "fair" circumstances. The state flacks smell too much money and fame.

I remember the Manson Witch trails in LA forty plus years ago. In the Manson case the incompetent judge quickly lost control. He should have declared a mistrial in the first few days. But...alas to much public pressure, fame, money, books and movie rights for that.