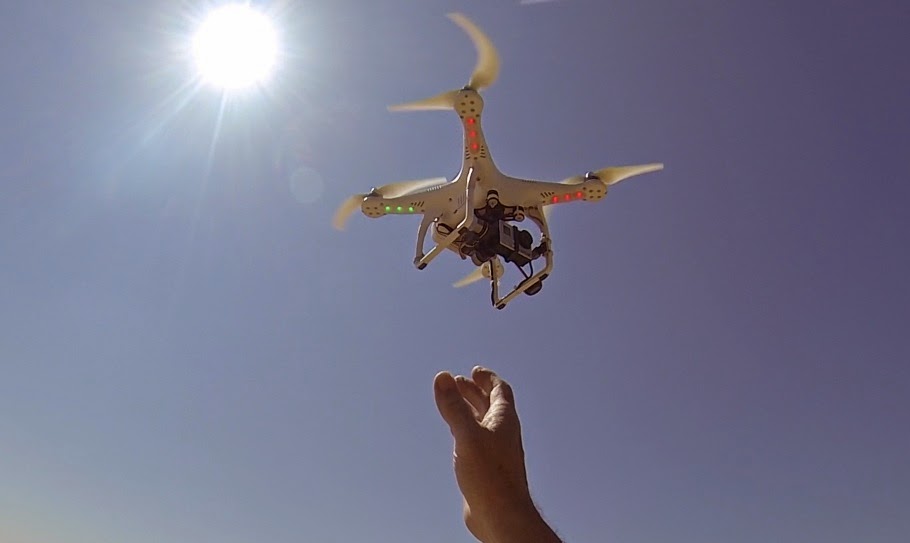 Los Angeles, CA—An undetermined but huge numbers of little camera drones are in civilian hands all over the world.  They are safe, somewhat simple to operate and the cameras are capturing stunning images.
We can easily guess that the number of multi-rotor drones in the USA currently far exceeds that of conventional helicopters.
Drones for the most part are ignored by the Federal Aviation Administration unless they are used to earn money or are flown inside or too close to airports without control tower permission.   The FAA has advised the drone owners to fly below 400 feet in order to avoid conventional aircraft.
Currently there are adequate laws in every state that cover drones or their potential involvement in endangerment, assault, stalking and privacy invasion.
The FAA has missed their deadlines and has all but abdicated its responsibility to integrate these devices with other air traffic.
One federal judge has already slapped the FAA and their ban on commercial use has been voided.  That matter is currently under appeal.
Other than constant obstruction the FAA has done nothing to encourage the collision avoidance system and other testing by drone manufacturers.
The voracious drone market competition shows promise of new safety hardware and software development.   That certainly shows the potential of real safety benefits all aircraft passengers and those on the ground.
Because of the FAA testing is being done everywhere but the USA!  We as a nation are falling behind.
Any safety concerns by the FAA are without foundation.  There’s never been a remarkable accident!  No lives lost.  Any injuries related to the drones are a few cut fingers of the drone owners because of ill-advised handling.
Public safety would be greatly enhanced if the little drones were used instead of fixed wing planes of helicopters.
The drones are battery powered and environmentally friendly.  The noise from the drones is so much less than regular aircraft.
Most importantly drones are so much cheaper to operate.   The savings to taxpayers would be huge if government agencies embraced these things.
For example automobile accident investigations and criminal investigations on our roads rely on time consuming diagramming by cops.  If cops used a camera drone they’d have picture perfect and to scale evidence.  This can be done quickly eliminating prolonged traffic tie-ups.
Insurance companies could quickly survey damaged property after floods, storms and fires.
Farmers, cattle ranches and rescue crews will all significantly benefit from using drones.
The FAA is by nature another power and money hungry bureaucracy beast.  The FAA must realize that they can’t keep up with millions of 12 year-old boys flying drones above the roofs of their homes.
The FAA needs to back off and stick to their original mission of dealing with manned aircraft.  I don’t see much argument over measured and reasonable regulation of drones weighing more than 55 pounds.
Politicians likewise need to let the existing laws work instead of obstructing business and public safety with unfounded “Chicken Little” predictions of doom and death.
The operators of the little camera drones for the most part police themselves.  They understandably don’t want to endanger their expensive drones, cameras, the public or themselves.
For the few drone operators that might choose to use drones criminally the local police have sufficient manpower and resources for enforcement.
Posted by Paul Huebl Crimefile News at 10/09/2014 08:36:00 AM