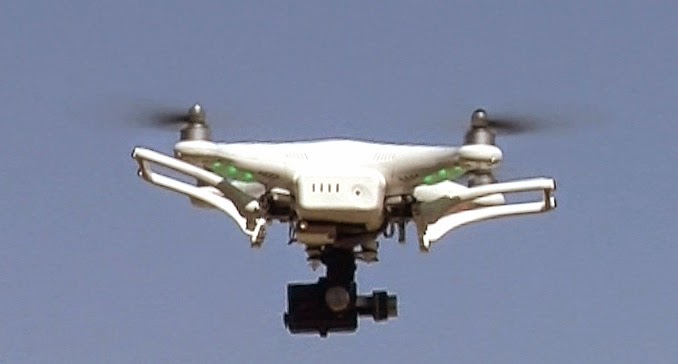 Los Angeles, CA—There are many thousands of camera-armed drones out on the American marketplace.  Today they far exceed the numbers of conventional helicopters.
Unlike conventional aircraft the little drones have a perfect safety record.  So far no reported deaths or serious injuries have occurred.  Injuries so far have my minor requiring little more than Band-Aids.  When accidents happen it’s because the drone’s owner put his fingers to close to the propellers.
Now the Obama Administration's FAA wants to create civilian drone regulation and greatly expand their manpower, budget and agency size.   It’s really just an unjustified power grab.
The little drones are not recognizable on radar screens.  Putting ID numbers on them is silly because even with the best binoculars nobody could read them anyway.
They are simply not a threat to public safety or our airspace.
The laws covering criminal endangerment, assault, stalking and privacy invasion are more than adequate to deal with that kind of behavior by drone operators.
The real issues are related to flying them in urban areas.  The reality is that's exactly where the drone operators are located.
Realistically safety concerns are relative to the size of these drones.  The consumer type drones range from a few ounces to a few pounds.
The ones likely to be used by filmmakers, Drone journalists and surveyors must be larger to accommodate more sophisticated equipment.  More skill is needed to fly these very expensive machines.
I don’t care how any of us feel about the drones they are here to stay.  Their good use far outweighs the contrived and unrealized fear of the drone detractors.
Many officials have yet to learn that the First Amendment like any typewriter, paintbrush or other camera protects the camera drones.
The issue of flying over crowds needs some attention.  Simply said, you can photograph a bunch of protestors better from an angle rather than directly overhead.  Flying near rather than directly over their heads is both safer and will provide better images.
In urban areas or for that matter anywhere I find that flying early in the morning provides better lighting and far fewer people are out on the streets.
Night flight provides much better view of the drones for the operators.  I find that flying them from large empty parking lots with ample lighting is the perfect place to pilot the drones for night flight.
If the FAA over-regulates these things policing them would be incredibly expensive and difficult.  Frankly the FAA would simply be ignored.
Learning how to fly these things inconspicuously is not difficult.  You simply find a place to deploy and land your drone.  You bring your drone into the target area, get your video and get out.  If you do this right you could do it completely unnoticed.
If you’re doing it right, by the time authorities could be informed about your scofflaw drone it would already have completed its mission!

Should there be over-regulation, count on me being a drone scofflaw.

You also need to know that unless you lie to officials or confess it may be nearly impossible to prove who was operating the drone.  If you become a target of an investigation connected to drone use say nothing!  Tell them four simple words, “I want a lawyer.”
In most cases they can’t even use a YouTube video against you in court without violating hearsay evidence rules.
If the Obama's FAA thinks they can police every youngster with little drones they really need to stop smoking crack.
This Christmas there will be many thousands of these things given to good boys and girls.  The FAA needs to leave them alone.
Posted by Paul Huebl Crimefile News at 10/15/2014 04:50:00 PM

Of course here in Illinois where the party of corruption, stupidity and ignorance rule - hearsay evidence is completely legal.