Will Phoenix TV News Organizations be Ready for the UAS Drone Reporters? 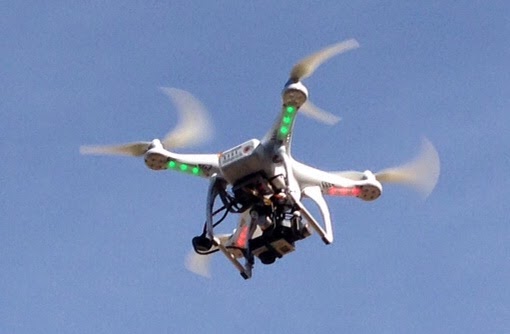 Phoenix, AZ—It appears that KTVK-TV has at least for now ended their decades long romance with expensive helicopters.  Pilot/Reporter Bruce “Chopperguy” Hafner’s current leasing contract ran out and has not been renewed.   It appears this will significantly change the way news will be covered in this medium TV market.

For the last nearly two decades TV news has hemorrhaged viewers everywhere and keeping a helicopter on standby with a pilot/reporter is more difficult than ever considering that is any news department’s single largest expense.
TV news has had to adjust to lost revenue by replacing some news crews with multi-media journalists that write, shoot and edit reports that once involved as many as four or five people.  They’ve made drastic cuts and quality of the news product delivered has sadly declined.  The once glamorous and high paying careers of reporters and anchors are on the ropes.
Replacing anchors with a director queuing up news packages where reporters introduce themselves and stories is an alternative.  However things go wrong with live shots and this can become a visual disaster without a glib anchor moving the audience on to the next story.
Reporting news this way can be done but most often is at the expense of getting the whole story.  You can also argue that the video quality is less pleasing without a top-notch video camera operator.
It’s very challenging for a multi-media journalist to investigate or even minimally vet the material and people getting coverage or face-time in a news event.  I’m sure that government agencies especially those not performing well with taxpayer money are breathing easier these days.
The question I have is, what’s in the future?  I’m not sure anyone really knows but for now TV news must roll forward with the resources they have.  Without the cost of a helicopter resources can be reallocated and perhaps a few jobs saved.
The needed skills of a TV reporter have now changed.   With the advent of inexpensive cameras, video equipment and laptop video editing reporters must know a lot more than simple reporting.
The newest job is still somewhat in Limbo waiting for possible Federal Aviation Administration regulations.  That should be happening within a few months and that gives news organizations time to find and properly integrate this new breed of reporter. This technology also creates yet another new discipline to learn for TV reporters, Unmanned Aircraft System (UAS) or Drone piloting.
Are the UAS or drone pilot/reporters going to be able to fill the void left by guys like Phoenix pilot/reporter pioneers Jerry Foster and Bruce Hafner?  Perhaps not in every situation like for example high-speed car chases that most often involves many miles of travel.  Hafner and Foster always had the advantage of solid real time communications with police and aircraft control towers.
Most situations involving aerial reporting contain static shots of accidents, crime scenes and fires.  The UAS drones can easily handle that kind of duty.
The UAS has other advantages like safer operation in risky weather and functioning at much lower altitudes.  Any TV station can own several of these devices and have them strategically located throughout their coverage area for quick deployment.   That could actually beat the time a helicopter has to travel from hanger to news story even at 120 MPH.
A UAS can actually broadcast live provided you have additional hardware and a live-truck with operator nearby for that purpose.   However it’s really simple to gather video for news packages in the normal course of events.  If done properly a TV news department can actually offer much more aerial B-Roll style video that ever before.
As for acquiring the UAS piloting skills they are not nearly as simple as I was led to believe.  Because you’re flying at a much lower altitude you have many more obstacles like power lines, cell-phone towers, buildings and trees to avoid.  As you are trying to avoid these things sudden gusts of wind can add significant challenges.  I’ve even had agitated seagulls attack my drone and thankfully I was able to out maneuver them!
These UAS all rely on GPS satellite navigation and that keeps them within control range of nearly one mile.  In an emergency simply turning off the transmitter will cause a UAS to return and land in the same place where it took off.
You must practice emergency landings. Yes. I’ve had mishaps related to pilot error complete with broken propellers but no injuries or other property damage was involved.   Those mishaps are just a part of the on the job training.   I can say that each day my own piloting skills are getting better.  I’m hooked on the two drones I own.
It does take both skill and hours of practice to become proficient with these amazing drones.   Any journalism student or practitioner should learn this new discipline.  The inherent safety of the UAS and reduced cost to deploy them insures we will be seeing them used by virtually every news organization that uses video.
I think it would be a lot of fun to be the first UAS/drone TV reporter in Phoenix.   You can count on seeing much more aerial video simply because they can do it so inexpensively.
I can almost see the TV promotions department’s Sweeps ad campaign claiming to have the best drone video reporting ever!
The UAS drones can help TV news during the period while the industry reinvents itself for the next generation.  Undoubtedly the over the airwave broadcasts will soon end as all news is distributed via the Internet.
Here is some unedited video I shot over a friend's home near Chicago a few weeks ago.  Instead of music you'd have the reporter's voice over.

The cops are going to hate these. They know they are silent and will catch them with their pants down. They're already trying to guess when the first type Rodney King video will make headlines.

Despite Bruce leaving, KTVK still is part of the news share helicopter "news 20" which is shared between channels 5, and 12 as well as 3. With that said, up until now, Channel 3 was actually using 2 helicopters. Something that was unheard of in any market.