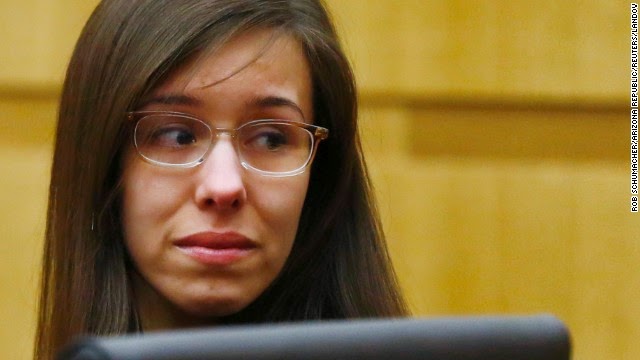 Phoenix, AZ—Jodi Arias was arrested tried convicted and may yet face an executioner.   Her stories about the June 2008 death of her former boyfriend, Travis Alexander varied significantly.  Was it justifiable?  The jury along with everyone else could only guess.  Since when does a guess prove guilt beyond a reasonable doubt?
Alexander withstood well over 20 cuts or stabs from a knife and a gunshot wound to his head from a tiny .25 ACP pistol bullet.  He had plenty of so-called defense wounds on his hands and arms.  That means he was putting up a serious and deadly fight with Arias.  Apparently Arias won the struggle.  Who was the initial aggressor?  Was this fight spontaneous or a murderous attack on Alexander by Arias?
Many people like to believe that they are positive of their favorite theory of what happened during this epic battle that nobody saw.
Arias lied but innocent people often exaggerate and lie all the time out of simple fear.  Hell, most Americans can’t seem to tell the truth about why they were late for work.
I don’t really think Arais' lies mean much at all.  She may have tried to cover up her involvement simply to put this horror behind her.  Who in their right mind would want to explain such an event to a bunch of cops?  We’d all want to do whatever we could to make something like this go away.
Is Arias guilty of Capital Murder?  Hell, I don’t know.  On it’s face it looks like a violent emotional outburst rather than a planned event.
The repeated stab wounds would have angered Alexander and caused him to fight even more desperately.  It takes a lot of injury to stop a strong healthy human and most of the injuries were superficial and non-fatal.
The trial of Jody Arias was an exercise in Roman Coliseum style, ghastly entertainment.  Tongues were wagging about this trial coast to coast.  The Arias jury was undoubtedly influenced by the crush of the celebrity pundit opinions despite numerous and ineffective admonishments to avoid the media and Internet.
The un-sequestered Arias jury could not help but see the hoopla and unprecedented media encampment surrounding the Maricopa County Superior Court during this circus.  We can pretend they were not influenced but we all really know better.
Prosecutor Juan Martinez paraded around like a peacock as he signed autographs for his adoring audience.  The trial became a shameful sham as Judge Sherry Stephens surrendered all of the decorum and dignity American trials are supposed to maintain.  Arias was convicted as the crowds outside cheered louder that what we’d hear at any Super Bowl.
Since the trial there has been non-stop secret court hearings on this case reminiscent of those infamous Star Chamber proceedings.  This may be an attempt to slow down the publicity cyclone they created, but it’s way too late to un-ring the bell and somehow establish a sudden sense of fairness.  They manufactured a Guilty verdict by popular public opinion rather than evidence.
Arias’ rights to a fair trial have been violated in the gravest extreme.  When an American’s rights are violated by the misconduct of courts or prosecutors the only remedy is to declare a mistrial and to attach jeopardy.  Simply said, it’s time to free Jodi Arias after six years of imprisonment and one of the poorest excuses of a trial in American history.
Judge Stephens and prosecutor Martinez can pretend that they bear no responsibility for this giant farce.  They played to the celebrity crush and facilitated this disgrace.  They both deserve to be purged from the State Bar of Arizona for their misconduct.  They both knew better.
Posted by Paul Huebl Crimefile News at 5/18/2014 06:36:00 PM

Agreed. There is more professional behavior displayed in your average middle school play. Citizens should be outraged, and someone needs to re-read "Maintaining the Integrity of the Profession" for a clue. Keep up the good coverage sir.

Double Jeopardy doesn't apply to mistrials.
I seriously doubt that a new jury would find Arias guilty of anything less than 2nd degree. There's plenty of circumstancial evidence of premeditation to convict her.
Secondly, I don't think stab wounds "anger" people so much as make them try with every ounce of strength to get away from the person stabbing them. That's where the self-defense theory falls short.

Frank, usually I delete comments like yours where erroneous information is offered. There was NO mistrial declared on the actual trial, just with respect the penalty phase. Arias stands convicted of 1st Degree Capital Murder because of that trial.

Your statement of the law is dead wrong! Prosecutorial or judicial misconduct during a trial that end either in a uniramous Guilty verdict or a deadlock can be grounds for a mistrial where double jeopardy attaches.

Neither of us where present and your guesswork falls substantially short of mine.

I think it was clear that Arias indeed stabbed and shot Alexander. However, after watching the trial, and reviewing parts of it on YouTube, I just don't see that D.A. Martinez proved his case. There was plenty of reasonable doubt about the motive and intent of Arias.

Agreed that the media attention, especially HLN, was way over the top. I think there should've been a mistrial, and some sort of penalty imposed for misconduct by Martinez for the shameful way he conducted himself..

All the media attention, especially Nancy Grace and HLN was disgraceful to our Judical System. Due to the prosecutor Martinez misconduct and the Judge allowing it ...should be grounds for mistrial. The defendant appeared smarter than the prosecutor who made a complete ass of himself.

The article says there were "plenty of defensive wounds on his hands and arms" but, in actuality, he only had three relatively minor cuts on his left hand, a minor cut on his righthand (dominant) thumb and none on either lower arm which one would expect if he was using his arms as a shield against a vicious knife attack. This is not consistent with someone trying to fend off a knife attack for two or more minutes, especially a180 pound man against a woman two-thirds his size. And that Jodi had virtually no wounds is an indication that she was moving away from him (and the violence) for most of the time, only inflicting the knife wounds at the end when he finally caught up with her. Please read:

If you would like to donate to Jodi's appeal fund, http://justice4jodi.com/
http://laschi03.wordpress.com/2014/05/20/is-the-jodi-arias-legal-defense-fund-legit/
Buy Jodi's art here:
http://jodiarias.com/