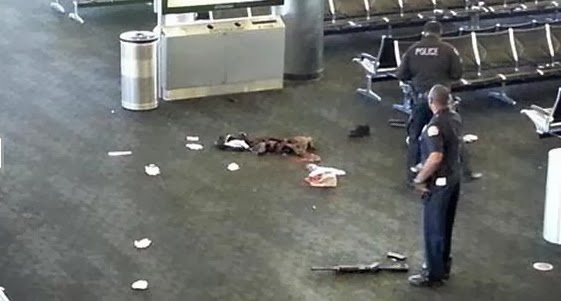 Los Angeles, CA—This morning, Pennsville, New Jersey native Paul Anthony Ciancia, 23 was apparently a ticketed passenger.  His parents as described him as being suicidal.  Allegedly Ciancia removed a carbine and stormed the TSA checkpoint easily breaching it entering the passenger terminal area.  LAX police officers responded to this engaging and critically wounded the lone gunman.
As many as seven were injured and one TSA worker was killed.  Ciancia is believed to be under FBI guard in critical condition after surgery at the UCLA Reagan Medical Center.
The media is erroneously referring to the TSA workers as “law enforcement officers”.  They are not and law enforcement officers nor can they enforce any laws.  They are not vetted, trained or qualified to do more than report what they see to the real police.
Media morons have been rambling on calling TSA workers “brave men and women” sending me looking for a big barf bag!  The TSA is nothing more than actors in the security theater jobs program.
If anything this shows the ineffectiveness of the TSA security program.  The local cops had to respond and deal with Ciancia’s assault.
Imagine if a few as six terrorists breached the TSA gauntlet.  They would have easily neutralized armed cops as they gained access to any planes connected to jetways.
The real protection really rests with trained and armed pilots that make a tiny percentage of flight crews.
This incident was so over policed that it cost airlines and taxpayers millions in disruptions. Passengers missed weddings, funerals pre-paid vacations and business meetings.
They forced hundreds of thirsty and hungry stranded passengers to the street.  How difficult would it have been to obtain and distribute water to these victimized passengers?
Traveling by commercial airlines has become an expensive and necessary evil rather than an enjoyable experience.  TSA and airline workers visualize themselves as prison guards as they abuse passengers under color of law.
I can’t wait to hear the TSA workers whining for their own gun rights as they deprive everyone else.  Bureaucrats will try to dream up more way to abuse passengers in the name of security.
Airports are like any other Gun Free Zone inviting violence with inexcusable vulnerability.
Posted by Paul Huebl Crimefile News at 11/01/2013 04:12:00 PM

The second I heard about this I knew it had to be in another of the libs "gun free zones". Too bad the shooter didn't go by that but they never do, do they?