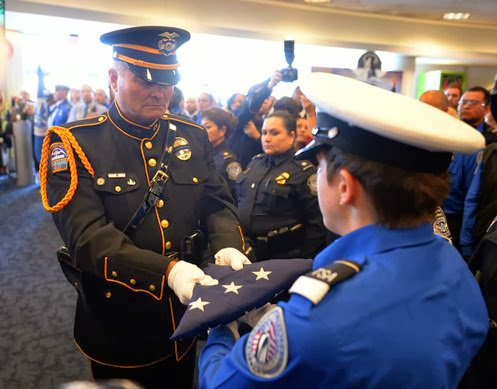 Los Angeles, CA—Yes, our tax dollars paid and will continue to pay for undeserved honors for a dead TSA screener.
On November 1, 2013 suicidal gunman Paul Anthony Ciancia opened fire at Terminal 3 at LAX Airport killing TSA screener Gerardo Hernandez.  Hernandez was not a law enforcement officer, first responder or soldier.  He did not deliberately place himself in harms way for others.  He was like thousands of other unfortunate killed in the world, simply an ordinary murder victim.
The TSA security theater façade includes some 50,000 people without significant background checks, law enforcement training, arrest powers or firearms.  Dressed in police costumes these workers simply screen passengers that are fully aware they will along with their belongings be searched prior to boarding commercial aircraft.  This is not a dangerous job like being a cop, convenience store clerk or cab driver.

I have recoiled in disgust every time I heard a politician or news reporter say that Hernandez, "died in the line of duty." That's never applied to some murdered 7-11 clerk working nights to feed his or her family.  The TSA police costumes seem to have left a false impression.

I'd put TSA workers in simple  red jumpsuits saving taxpayers untold millions. They gave these people gold police type badges too?
Being a TSA screener is even safer than being a flight attendant, pilot or gate ticket agent.
LAX is the world’s fourth busiest airport moving nearly 40 million people every year.  It has its own police department and is supported by numerous additional local, state and federal law enforcement agencies. The TSA is nothing more than a pathetic illusion of security that insults, provokes and demeans passengers.  The TSA program is also in direct conflict with the Fourth Amendment to our Constitution.
Since the beginning of the TSA more than a decade ago no other worker lost his or her life while working.  Our government window washers, garbage men or postal service workers have a higher mortality rate from job dangers than the TSA.
When non-first responding government workers are killed on the job we don’t place flags at half-staff or hold government sponsored memorial demonstrations reserved for soldiers, cops or firemen killed in the line of duty. Why are they going whole hog for a TSA screener?
The full government honors given to Hernandez dilute the distinctions reserved for heroes.  I don’t mean disrespect for Hernandez or his family but being a murder victim does not confer special honor like heroism.
The TSA is an organization created to unlawfully trade liberty and privacy for unobtainable security. As a nation too many of us has allowed our government to convince us to forfeit our freedom for TSA fascism.
If anything the attack at LAX showed it’s beyond impossible to protect our airports and passengers by creating a totally screened Gun Free Zone!  This program was an abject failure.
The TSA was nothing more than a massive government jobs program for our unemployable, aimless and ignorant underachievers.
When it comes to government regulation of our skies and airports the inmates are clearly in charge of the asylum.
This deadly attack by a lone suicidal gunman who easily breached this secured airport terminal while having his way was absolutely predictable.  Thankfully the gunman avoided shooting innocent passengers while targeting TSA screeners.  That’s why scores or passengers were not killed.
Try to imagine what just three trained and determined terrorists could have done.  They would have owned Terminal 3, its passengers, employees and planes.  The carnage would have been extensive long before law enforcement could have ended such a siege.
If you still think that the TSA somehow helps prevent terrorism you are living in OZ.  The responsibility to defeat terrorism lies within all of us to physically do what we can to prevent it. Disarming off duty or retired cops, pilots, and trained security professionals is a sure way to insure that terrorists will always win.
Few people are aware that on September 11, 2001 two of the hijacked planes contained off duty cops that were disarmed by insane FAA regulations that are still mirrored by the TSA.  Had those officer been armed those two planes would have quickly removed from danger.
Had the airline pilots been routinely trained and armed Sept 11 would have been just another day.  Even today the revised armed, Federal Flight Deck Officer program is a paper tiger since the pilots can’t carry their firearms outside the locked cockpit.
I’m beyond shocked to see the TSA union and some politicians seeking to arm untrained and un-vetted TSA screeners before off-duty, retired cops and our pilots.
Posted by Paul Huebl Crimefile News at 11/10/2013 10:18:00 AM

Hand airline security to the airlines where it belongs. The planes are owned by a corporation, and it should be them dealing with the security on the flights and at the gates.
If I had an airline, I would offer a discount to police officers who flew provided they brought their gun with them. I would also extend that courtesy to people with CCW permits. I would prescreen every passenger. As soon as they ordered a ticket, I would run a background check and ensure they were who they claimed to be. I would not wait to the last minute to figure out who was a risk and who was not. I would provide additional scrutiny to all persons from the middle east, as well as people who hold anti capitalist or anti America views.
I don't trust cops, but I do trust that they will want to get to their destination unhindered.

I agree one thousand percent. BTW, who are those other uniforms?

Any thoughts regarding the January detention, strip search and subsequent colonoscopy that took place in Deming NM?

I, too, am wondering who the guy in the full military uniform is? Is he the TSA Grand Puba?

yes, obammao is slowly building the TSA, a Force of low intelligence lackeys, into his private Brown Shirt Gestapo officers. When allowed to expand large enough, they will do the Regimes dirty deeds outside the Airports, and will spill into the streets with phony necessity roadblocks, checkpoints, etc. They are a rogue Agency, operating already beyond the scope of their duties, and their duties have been un-necessarily expanded to give them more power to usurp the U.S. Constitution and the American people.

Bring back the video of TSA lady!

Here is the worthless TSA bitch named Butler that assaulted me and tried to muscle away my camera without any authority whatsoever. I'm sure she is well up the ladder of success at the TSA by now. Too bad she did not take the bullet that day...
Enjoy the video...
http://youtu.be/gpPB93tZsCk