The Next Nuclear Bomb Won’t be Delivered by a by Missile. 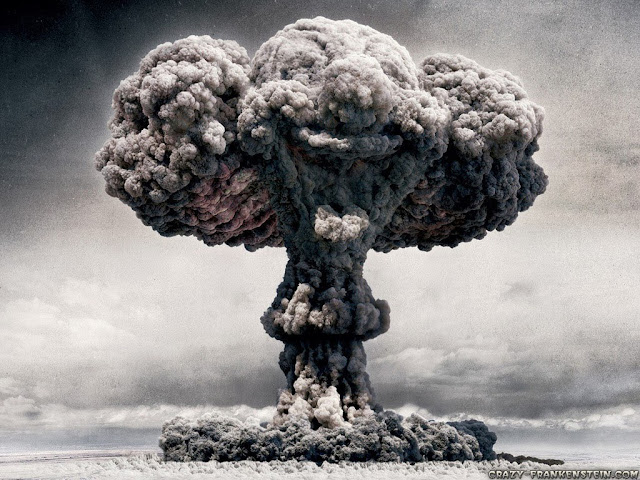 Arizona/Mexico Border—Our nuclear-armed enemies have had five solid years of deliberate and well publicized, near non-protection of our borders.  Instead of protecting our borders the Obama Administration instead beefed up the senseless fondling, groping and outright molesting of old American grandmothers and their little grandchildren by TSA goons at our airports.
The first and so far only use of the Atomic Bomb was by us against Hiroshima and Nagasaki, Japan in August of 1945. Soon thereafter Julius and Ethel Rosenberg and others stole the manufacturing secret passing that technology to the Soviet Union. The couple was executed in the eclectic chair for their dastardly acts.  From there the stolen secret has armed numerous nations some of which are rogue.
In the almost 70 years since we’d be really naïve to think building such a device is beyond that of any reasonably financed nation.  We really don’t know who has them or not.
We all somehow expect that a missile would deliver the next Atomic Bomb.  The rub there is that making such missile is expensive and difficult.  However the A-Bomb can be more easily and unnoticeably delivered by conventional aircraft or even by small trucks.
In case you were wondering the bombs we dropped in Hiroshima and Nagasaki, Japan were rather small in size but somewhat heavy.  The bombs were each nicknamed.  Fat Man weighed in at 10,300 pounds and Little Boy was 9,700 pounds.  Each bomb destroyed their targets and at least 200,000 people lost their lives.  That of course brought Japan to its knees and ended the war.
We flew the bombs to Japan because we were in a hurry and had not been able to invade by land.   We were also in a hurry but at the time this was newly enabled technology.
When they talk about Nuclear Arms the always mention missiles for some reason.  A missile could quickly deliver the deadly goods but planting them in simply mini-storage units would do the job better.  They could simply be detonated by a text message.
The next nuclear device set off in the world will have been planted moths or even years earlier.  There will be no air raid sirens, military intervention or warnings, just a city or cities blown to Kingdom Come.  With any luck the first will go off in the District of Columbia taking out all the traitors and fools that have allowed such a thing to happen.
The saddest part of all is that it’s the population of any nation that gets victimized by the bombs.  It’s a price they must pay for the provocations made by their leaders.

So true. Why would our many Enemies waste time and money for a missle attack, when our Borders are so wide open they could just walk in with suitcase nukes ? News flash, they're already here. Thanks again obama and Company.

So true. Why would our many Enemies waste time and money for a missle attack, when our Borders are so wide open they could just walk in with suitcase nukes ? News flash, they're already here. Thanks again obama and Company.

The sum of all fears. If you do a good job of casing it in lead, it will be virtually undetectable.
It may not be a case of who has access to the tech, but rather who has the money to bribe one out of the former soviet union.
I like to say that the expense we dole out at the pump is to finance the next terror attack upon our shores. Six years ago, the world feared us. Now? Meh.