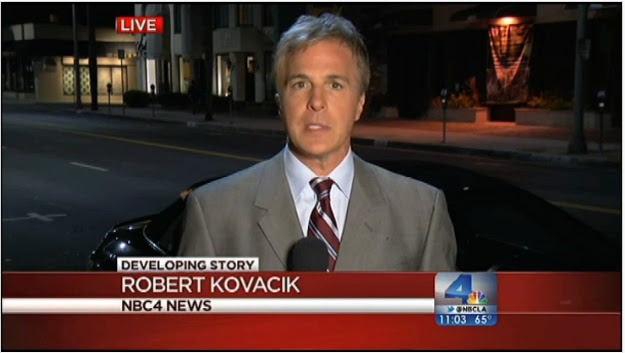 Los Angeles, CA—Aside from being a licensed private investigator I’m also a freelance investigative TV news field producer.  I was drafted into TV news because of my investigative skills and advanced knowledge of courts, cops and public records.
I’m proud to say I never failed to hose the competition on the various news stories I worked on over the years.  That’s all changed now because the shrinking budgets have greatly reduced ability news directors have to hire freelancers.  Todays local TV news is no longer competitive and it has be reduced to sending a two person crew out to cut a mediocre one minute, 30 second package or slap together a quick broadcast live shot.
By accident I had a second role with my TV clients and that was dealing with security matters.  For example I would be assigned to deal with some of the more aggressive stalkers that pursued some of the more popular anchors and reporters.  I served lots of restraining orders on the offenders and even arrested a couple of them.   Of course this kind of function must be discreetly handled so that neither my clients nor I attract attention for others in the news business.
In the past couple of years there has been a new and dangerous problem.   Armed robberies of news crews primarily targeting expensive cameras, laptops, cellphones along with cash and jewelry are in vogue.   This has been a huge problem in Oakland California and news coverage has been significantly reduced there as a result.
TV journalists no longer have to wait till they’re sent to a war zone to experience raw fear because it’s here now too.  Perhaps it’s the result of the economy, mass early release of prison inmates or both.  It’s only a matter of time until some reporter or photographer is killed while covering local news.
Often there are plenty of cops around where news happens but just as the lonely shot above shows my friend, TV reporter and anchor Robert Kovacik all alone without a cop in sight.
Incidentally Kovacik was doing a live shot one morning, covering a murder when he was actually interrupted during his standup by the actual killer!  Kovacik never missed a beat as he grabbed an exclusive interview before the suspect surrendered to the police.
In Oakland they actually hired some uniformed and armed security guards for their news crews.   However, recently a reported robbery netted not only the TV news gathering gear but also the guard’s gun!
Guard services generally employ slow-witted and poorly trained people for even armed duty because security work is rarely financially rewarding.  A warm body with a gun and a snappy uniform is hardly more than a distraction.
The best kind of security is invisible and of course there is safety in numbers.  What the newsrooms need are a few hybrid types like me.  Highly trained former cops that can discreetly carry a firearm as a last resort, that also really functions as a news crew member helping with equipment and news gathering.  An extra crew member can help set up and tear down the broadcast equipment reducing the time that valuable news assets are exposed to danger.
Because if my presence with news crews I have defused many sticky situations where people became angry that they were suddenly news worthy.  It is not as easy to push a photographer around or assault him or the reporter if there is a fellow crew member running interference.
News crews must learn how to evaluate risky locations and have a viable safety plan worked out between them.  Securing cameras and high dollar equipment that is not actually in actual use is necessary.
At night using normal TV lighting, as a way to blind potential opportunistic criminals is a great deterrent.  Robbers can often become discouraged if they are simply momentarily blinded and can’t even see what they want to steal.
Insurance may cover the cost cameras but that is always a slow process.  The emotional damage to even physically uninjured reporters can create a significant disruption to any news department.
There are a lot of honorably retired and well-educated and trained cops that can add significant news gathering ability to newsrooms and they are allowed by law to carry firearms.  Firearms do save lives in the right hands.  A field producer/security agent must know how to use his brain more than a gun.  The absolute goal is to keep security invisible while protecting lives and property.
I’d love to get some time these days with a night side news crew covering crime stories if only they could afford me.  I’m also well qualified to audit any news department’s security program.   At the end of the day the news station owners need to provide a safe workplace for their crews with minimum risk of liability.
I’ve not seen my job description on any news department’s recruiting materials.  I think that will be changing soon.