Our Military Leaders Must Remember the Nuremberg War Crimes Trials! 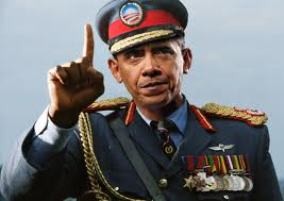 Nuremberg, Germany—When the Third Reich collapsed and surrendered in 1945 those Nazi military leaders that could be found were rounded up, jailed and tried by a special tribunal of those victorious Allied Nations.
To a one the accused military suspects cited as a defense that they were only following orders and that had they disobeyed those orders they would have been shot or hanged.

The international precedent was established that eliminated that defense and the defendants were held to a standard the precluded Waging Aggressive War and Crimes Against Humanity.  Nearly every defendant was found guilty and most of them were hanged.
Now Barack Obama has put our military leaders at a crossroads similar to the Nazi regime.  Hitler engaged in starting war after war and Obama is doing precisely the same thing.  Our military leaders must not allow themselves to be taken down the war crimes path by our psychotic Commander and Chief.
This is not about pacifism or becoming a Contentious Objector but the duty all solders have to not follow unlawful orders.
Our members of the military have taken an oath, not to Obama but to the U.S. Constitution.   If there s reasonable doubt that an order is lawful, members of our military have a duty to refuse such orders.
At some point the military may have a solemn and sworn duty to arrest the President and other officials in our government for war crimes and treason.  Our military needs to know that America backs them if they follow their oaths.
Following a war criminal's orders may lead to disgrace and actual execution as s depicted n the film below:

It is ALL about our U.S. Military now. The Politicians, as expected, are already selling us, and the Country out, one by one. Will they continue to follow the Communist Muslim Commander in Chief Leader, and be his and the NWO Enforcement Tool for a continuing Dictatorial Totalitarian Regime here in the United States of America, thus ending tbe USA as a fre Country as we know it, or will they do the right thing ? We will know shortly. If they choose to continue to be forced to follow the False President, America is over. Pray that they will make the right decision to uphold the U.S. Constitution, or it will be Hitlers Nazi Germany and the 3rd Reich, all over again, here in the former USA.

Snowden is a candidate for the European Parliament’s Sakharov Prize for Freedom of Thought, named after Soviet scientist and dissident Andrei Sakharov, which honors people or organizations for their work in the defense of human rights and freedom of thought.

Christian Engstrom, a member of the Swedish Pirate Party who co-nominated Snowden for the award, wrote that Snowden is “paying a heavy personal price” for his “heroic” effort.

“The US government hunts him as an outlaw… Governments that dare to offer him asylum are threatened with dire consequences by the US government,” Engstrom wrote on his personal blog page. “In a painful irony, his only sanctuary is Russia, a country with democratic problems and authoritarian tendencies.”

Regarding restoring Privacy, Dignity and Respect To World's Citizens including US Citizens

Via Cryptome, - NSA espionage activities and their impact of citizen rights from the European Parliament’s Policy

The Snowden’s revelations highlight numerous breaches of fundamental rights. This affects in priority all the persons whose data have been extracted via surveillance of communications, digital cables or cloud computing technologies, as soon as they are under a category of suspicion, or of some interest for foreign intelligence purposes. However, all these persons are not protected in the same way, especially if they are not US citizens.

The EU citizen is therefore particularly fragile in this configuration connecting US intelligence services, private companies that provide services at the global level and the ownership they can exercise over their data. It is clear that if EU citizens do not have the same level of protections as the US citizens, because of the practices of the US intelligence services and the lack of effective protections, they will become the first victims of these systems.

Freedom of thought, opinion, expression and of the press are cardinal values that have to be preserved. Any citizen of the EU has the right to have a private life, i.e, a life which is not fully under the surveillance of any state apparatus.

The investigative eyes of any government have to be strongly reminded of distinctions between private and public activities, between what is a crime and what is simply a different life-style. By gathering massive data on life-styles in order to elaborate patterns and profiles concerning political attitudes and economic choices, PRISM seems to have allowed an unprecedented scale and depth in intelligence gathering, which goes beyond counterterrorism and beyond espionage activities carried out by liberal regimes in the past. This may lead towards an illegal form of Total Information Awareness where data of millions of people are subject to collection and manipulation by the NSA.