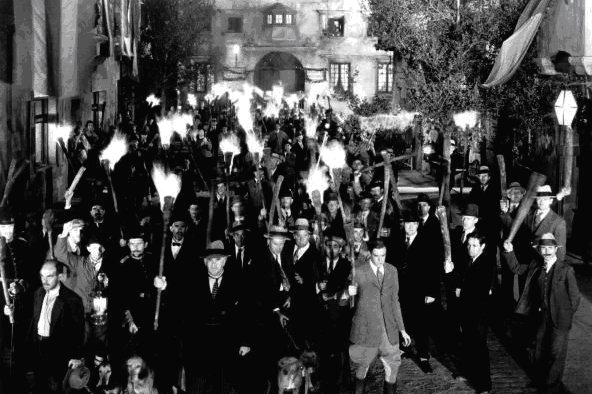 Phoenix, AZ—The modern day lynch mob is in place with their smartphones at the ready to capture their idea of judicial history.  The nearby streets are filled with satellite trucks and the TV studio tents for the celebrity media pundits.  The out-of-control media at its worst has already relentlessly tortured the hapless defendant. The Jodi Arias case has shown that human civilization has not improved since the beginning of mankind.
I really can’t understand the fascination of so many people for this run of the mill domestic killing.  Arias is no movie star, sports figure but just another under achiever caught up in a common crime.  The killing of her boyfriend is just not the same as the kind of crime we reserve for the death penalty or for that matter even life imprisonment.
The only thing we really know for sure is that Arias killed her sometime boyfriend with a great deal of anger and passion.  We also know that she lied and covered up her role in the killing.  Is that really so unusual?  People easily lie about the reasons they are late for work; is deception to avoid the greatest punishment provided by law somehow beyond our understanding?
Arias made some terrible decisions for sure.  In most jurisdictions her case would have ended in a plea agreement that would have netted her less than seven years in prison.  Arizona’s punishment for crime is as harsh as it gets in America.   Under normal conditions in Arizona, Arias probably deserves at least 20 years behind bars for her crime.  That’s certainly enough time to ruin her life, make her really miserable and satisfy most cries for retribution.
For a lot of people death would be easier to face than 20 years in an American prison.  The confinement, bad food, substandard medical care, inherent dangers and loneliness can easily become worse than a quick and painless death.
The death penalty brings with it a huge price tag.  The public forgets that we have a Constitution and Bill of Rights that guarantees an appeal process that takes sometimes 30 years or more!  The legal fees for both the defense and prosecution are always well into millions of dollars and the defendants are always indigent.  It’s far cheaper to keep prisoners locked up than killing them.
A death penalty case has its advantages for prisoners; especially those that did not get fair trials or those who are actually innocent.   Death cases are overturned at a much higher rate than the non-death ones.  The courts are far less careful in prison only cases.
The shameful spectacle that has been the Jodi Arias trial is fraught with appeal land-mines.  The higher courts will be looking at every judicial ruling, juror misconduct incident, prosecutorial misstep and the tainted climate brought on by the circus atmosphere.
This could all be avoided with a reasonable plea agreement right now.  Okay plea agreements only come before trials however no law exists to prevent them post trial.  Arias would also have to waive all appeal rights.
Would society really suffer if Arias were to simply to be sent to prison for 20 years with no rights to appeal?  What could be done with the millions of dollars saved?  How many young scholars could we send to medical school?  For you law and order types how may cops and prison guards could be hired with the money saved?
Ending the Arias case with a 20-year, non-appealable prison term would be too simple and cost effective to satisfy Arizona’s bloodthirsty politicians and lynch mob members.  These are in fact the same people that supported Gestapo tactics and the People’s Court of Germany 1933-1945.
If we must have a death penalty it should be reserved for only the most heinous of murders with a much higher threshold of guilt than some jury’s reasonable doubt guess.  Would it be too much to ask for absolute proof before we take someone’s life?

I genuinely believe that this was self-defense, and Jodi Arias should have been found not guilty.

I have looked deeply into this case, perhaps you would reconsider if you look at

especially where I analyse the crime scene in detail here

and conclude that the physical evidence proves that Alexander was intent on attacking her.
javascript:void(0)
There is no other reasonable explanation for the facts other than self-defense, and certainly no proof beyond a reasonable doubt of that.

The dissociative amnesia aspect makes it a very challenging case to reason about.

I genuinely believe that this was self-defense, and Jodi Arias should have been found not guilty.

I have looked deeply into this case, perhaps you would reconsider if you look at

especially where I analyse the crime scene in detail here

and conclude that the physical evidence proves that Alexander was intent on attacking her.
javascript:void(0)
There is no other reasonable explanation for the facts other than self-defense, and certainly no proof beyond a reasonable doubt of that.

The dissociative amnesia aspect makes it a very challenging case to reason about.

I believe Jodi Arias is guilty as sin. She appears to be narcissistic, self involved, selfish, and a showboat, always trying to get in the spotlight. I do agree that the media fascination with this trial is way over the top and shameless. Any time that witch Nancy Grace is on TV constantly you know you have a media circus trial going on.