Jodi Arias and her punishment 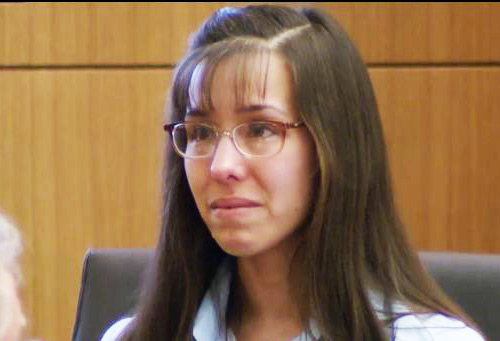 Phoenix, AZ—The Circus has folded up its tents and vacated the surroundings of the Maricopa County Superior Court Building complex that hosted, “The Greatest Show on Earth.” If that sounds inappropriate that’s because it was just that.   That Jodi Arias trial was something of a perverted Roman Holliday.
Jodi Arias was involved in a somewhat routine domestic disaster that left her young boyfriend Travis Alexander dead.  We now know that Arias killed him but the exact circumstances are shrouded in lies and mystery.  Lies from the mouths of frightened suspects usually flow like water at Niagara Falls.  Was the killing justified?  We can only guess.  Domestic homicide often unleashes massive rage because of so many factors unique to our most intimate relationships.
Women defending themselves from attack by men have little choice but to use deadly weapons because there is usually a serious disparity of force between men and women.  Alexander’s injuries don’t shock me, I’ve seen worse in proven justifiable cases.
It really makes no difference in our criminal justice system whether the accused is actually guilty or innocent.  The jury simply weighs the material it was given to arrive at a verdict.  If the jury get’s it wrong that’s just too bad. Their verdict and they way they arrive at it cannot be second-guessed by an appeals court.  Only judicial errors get review by the higher courts.
If jury misconduct is discovered that’s a different matter.   That generally will lead to new trials.  Jury misconduct is very difficult to investigate or prove.  Judges always go out of their way preventing defense attorneys from making effective inquiries of jury members.
The jury in the Arias case voted unanimously for a 1st Degree Murder conviction making Arias a serious contender for Death Row.  When it came to sentencing at least four of them did not have the stomach to kill Arias.  She faces a new panel and sentencing hearing.  Questions remain about double jeopardy and finding an unbiased new jury panel.  The only thing that’s certain is the massive cost to arrive an acceptable punishment.
This should never been prosecuted as a death penalty case.  Alexander’s family members are Mormon and that religion believes that blood must always be shed to avenge a killing.  Mormons have a lot of influence especially in Republican Primary Elections in the greater Phoenix area.   The County Attorney, Bill Montgomery is under a great deal of political pressure to make sure Arias is put to death. It appears that may not be possible now.
The best thing for justice and taxpayers may be an agreement for something like 25 years to life behind bars.  Realistically that’s a much higher price than would be exacted in most other states.  Arias will be retirement age upon the earliest possible release date.  The woman could do a lot of good or not during that massive amount of time. She’d at least have a chance to redeem herself.
Have we become so blood thirsty that we want to see this woman strapped down and killed?  Frankly that is beneath the dignity of any civilized nation.
Let’s save a bundle of tax dollars and settle for an agreement that would end appeals by Arias. Let’s hope that she can someday redeem herself.  Nothing will bring back Travis Alexander or fill the hole left in his family.  Frankly the Alexander family won’t find peace until they can forgive.  Arias must earn that forgiveness by becoming a good example to the other inmates of Arizona’s prison system.   The taxpayers need a break too.  Lets hire more cops or schoolteachers with the money we will certainly waste on killing Arias.

I spoke about the Travis Alexander murder with a good friend of mine, a well respected former Dakota Chief who retired after serving on the parole board for several years. He told me that in all his years in hearing paroles, he has never heard of a woman capable of such violent stabbings. This is something that men are capable of. He told me that when woman murder by stabbing it is usually when they are drunk and it is one or two stabs at the most that penetrate the heart which is only an inch or so below the skin. He agreed with me it is outrageous to think that a woman could slit someones throat from ear to ear, particularly for someone with a non-violent past.