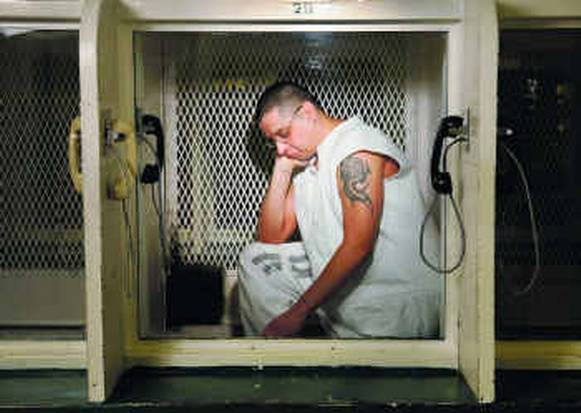 Florence, AZ—Currently there are 121 men and three women on Death Row in Arizona.  The killing here substantially exceeds larger states like Texas for per capita executions.  There has been a number of exonerations here and certainly more are expected.
The State of Arizona like several others has cut off TV news from access to any inmate for any reason.  Inmates can write letters but letters don’t make watchable TV and prison officials know this.  A huge percentage of inmates are illiterate and can't even write a simple letter.
Prison officials try and justify this by suggesting that crime victims become traumatized whenever inmates appear on TV.   That’s hogwash unless of course some "victim" falsely accused and obtained a conviction against an innocent person.  Yes, that does happen far more often than we will admit.
The media does not like wasting time listening to inmates whine about their troubles.  They only will commute to the remote locations where the prisons are for compelling reasons. These kinds of interviews happen rarely even in the jurisdictions that allow them.
Most lawyers hate for their clients to talk to the media because they tend to incriminate themselves even further during the appellate process.
Often an inmate can raise issues of corruption or doubt that have real merit.  Is there somehow harm when an inmate wants to make it public that prosecutors and courts are refusing to administer DNA tests that would exonerate him?
The inmate media embargo is really about saving law enforcement agencies and prosecutors from embarrassment in wrongful conviction cases.  The claim of saving victims from emotional harm rings deceptive, hollow and disingenuous.
Texas allows TV news crews full access to their condemned inmates right up to death’s door.  Often it is an inmate wanting to express remorse.   Sometimes it’s simply a self-serving gesture to gain sympathy.  Other times it’s a frantic effort to get their cases reinvestigated with today’s better tools before the death clock runs out.
When government hides their inmates from the media it flies in the face of open government.  Transparency is reduced to zero by solid steel doors and high prison walls.
Our prisons are being reduced to secret Gulags where anonymous inmates are housed in seclusion.  When inmates are so isolated that nobody can observe, horrible things begin to happen.
It’s time for Arizona and California to return to the policies of the past where the media has reasonable access.  Our penal systems seem to be headed for the policies of Devil’s Island or North Korea.  This departure from civilization is dead wrong.
Posted by Paul Huebl Crimefile News at 4/28/2013 01:53:00 PM