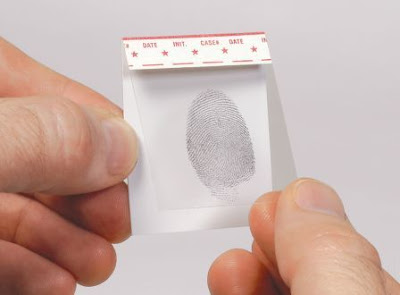 Washington, DC—They say DNA and fingerprint evidence does not lie and that’s for the most part a correct statement.  However those government officials involved in the investigation, collection, preservation and examination of evidence occasionally do some horrible things.  When that happens often it is a perfect crime, because proving such a case is almost impossible.
In 1990, Shirley Kinge was convicted in an arson/murder case that where four people perished.  The investigator involved was truly a Golden Boy, New York State Police Trooper, Robert M. Lishansky.  He was an 11 year veteran of that agency and considered one of their brightest and best investigators.
Lishansky was lifting prints from plain paper copies of filed inked fingerprint cards with standard lifting tape and then claiming he lifted them at crime scenes.  At crime scenes latent prints are made visible by dusting them with a fine black powder that sticks to the latent print oily material.  The tape is then used to lift the print image and then placed on a white card where it can be clearly observed, photographed and classified for comparison with the prints of potential suspects.
The prints “collected” by Lishansky always looked identical to those normally found at crime scenes.  However under special, non-routine scientific analysis the chemical makeup of the black material was copier toner, not fingerprint dusting powder!  Lisansky walked into courtroom after courtroom and gave perjured testimony with a straight face destroying lives along the way.  Lishansky was schooled in the frame-up procedure by his police supervisor, David Harding.
While being considered for a CIA position Lishansky’s supervisor David Harding was proving his skills as a secret agent to CIA official.  Harding bragged that he could frame anyone for murder and explained his techniques with some recent examples.  Harding may have been delusional in that he felt that this conduct was acceptable, or was he?  Just what did Harding’s superiors really know?  The CIA blew the whistle on Harding and before it was over he confessed to fingerprint tampering in numerous cases.
Lishansky was convicted and sentenced from 6 to 18 years in prison. Harding was sentenced to from 4 to 12 years.
The real rub here is that the victims of the frame-ups all were put in prison for much longer terms on the basis of the falsified evidence.  Thankfully New York abolished the death penalty or Shirley Kinge would have been sent straight to Death Row.  Kinge was released from prison soon after the tampering came to light.
Lishansky and Harding were dangerous serial criminals with police badges.  Under the laws of our states and the Federal Government a single incident of evidence tampering and perjury would normally allow for probation even if it involved a death penalty case.  Since this and many other cases involving corrupt crime lab technicians the penalties have not been increased.
We must change our laws to at least make perjury and evidence-tampering crimes carry the same penalty that the falsely accused and prosecuted victim was facing.   Here the cops framing innocents got prison only because it involved numerous cases.

Excellent essay. From planting guns to planting prints... Heck, with all this, I'm not sure OJ wasn't framed.

Oh, and I got here from Lew Rockwell's page. It's the first news site I check every day.

Fat chance of that happening. And the tragic thing is that the more police do this sort of thing, the more the citizenry, the very people they are attempting to protect, hate the police. A situation like this has a nasty habit of exploding. See North America 1775 or France 1789 or Russia 1917 for details.

are the perjuring creeps in the general population, as their victims were? bet not. after all, being part of the state apparatus, they are of a 'finer clay' than we, no matter their actions.

if on a jury and the only 'witness' is a cop, vote innocent...regardless of the 'evidence'.

Falsified evidence should result in at least the criminal serving the amount of time that the person they victimized served.

Police planting evidence? More and more it is shown that it has been common practice all along for both investigators and prosecutors. Gerald Celente is correct, it's not the Justice system, it's the "Just Us" system. And woe be to those who get snapped up in it.

The only remotely possible hope of putting a stop to these crimes is to take criminal forensic investigations completely out of the hands of the cops and the courts - and to keep both of the latter as far away from forensic labs and technicians as possible. Eliminate (or at least severely reduce) the possibility of evidence tampering and the problem will go away.

Government is the tool used by the worst people to do the most damage to the rest of us. And the belief that most people have, that it is necessary, is a testament to the fine job of brainwashing the masses, the ruling class has done.

The police world is RIFE with golden boys and girls.These people are totally taken care of and protected.They are the norm and not the exception in specialty and rank positions!!