Why Retired Astronaut Mark Kelly is Out As The New Face of Gun Control Propaganda. 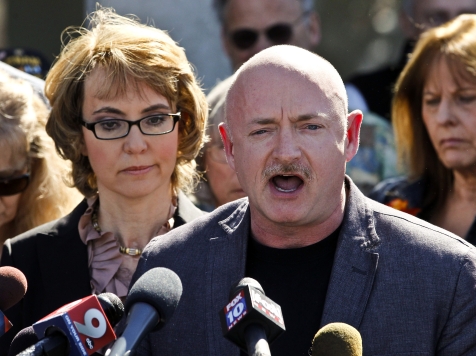 Tucson, AZ—Say it ain’t so!  Just one day after railing for a ban on so-called assault weapons, high capacity ammunition magazines and expanded background checks on simple family gun transfers it seems our retired space cadet Mark Kelly was buying the very guns he has been castigating.
Right now gun control has no face since Sarah Brady simply got too old and had to retire.   Gabby Giffords might be a natural choice because she got newfound fame for being the target of an armed madman.   Sadly Gifford’s injuries have robbed her of her ability to handle the duties required.  Currently here is no famous face of a knowledgeable and dedicated gun banner to take on that role.   The right quasi-celebrity could garner a large paycheck along with a high profile.  The gun banners had high hopes that Mark Kelly could fill Sarah Brady’s shoes.
Gabby Giffords was not exactly a supporter of Obama style gun control.  She actually had her own concealed weapon permit but unfortunately she chose to attend that fateful meet and greet event unarmed and defenseless.  The Democratic Party begged her to help them with their cause after the Sandy Hook school shooting.   Giffords and her husband opted for the anti-gun spotlight.  Apparently their personal convictions simply did not mirror their new high profile propaganda effort.
Kelly was suddenly walking the walk and talking the gun control talk. He testified before Congress and Just one day after giving similar testimony before the Colorado legislature he was out buying his own AR-15 rifle.  So much for Kelly’s public whining that no one needs these kinds of firearms.
Kelly walked into Tucson’s Diamondback Police Supply where he purchased an AR-15 carbine, several so-called high capacity magazines and a 1911 .45 semi-automatic pistol. Now they are in damage control mode suggesting he was somehow conducting an “undercover investigation” checking on the gun buying process.   Was law enforcement involved with Kelly’s Spook job?  Apparently that’s not the case.
Kelly has just dashed any hope of any other requests to become the celebrity gun ban advocate.  I guess someone else will have to be found for this coveted high paying propaganda position.

Their anti-gun stance was only about funding a lifestyle.

Hypocrite. Maybe he should go buy his wife Gabby a shotgun, like Biden recommended. WTF is wrong with these idiots ? Time to dump ALL of Them. We need new Leaders, not the thieving Liars who put America into 17 Trillion in debt, yet we still allow them to lead us. How stupid can we be?

An Astronut and a political nut.

he looks like a stinky pr*@k in a cheap sportcoat.

Politicians and Hollyweirdos are all hypocrites on the gun issue.

he looks like a stinky pr*@k in a cheap sportcoat.

Claimed in the media, he was buying it to turn it in to the police??? He therefore lied on his 4473. FELONY.

We don't need 'new leaders'. We need no leaders. The entire federal government is illegitimate and has been at least since Lincoln. The Swiss model is the minimum we should seek for America.

I think astronauts (or is he a cosmonaut?) are trained to drive from Texas to Florida in a "Depends" undergarments. Why would he be qualified to discuss anything related to law? Do we not have any physical requirements for cosmonauts anymore? Or do they just have to be Muslim?

I expect that he will next try to sneak a gun through a courthouse metal detector to prove how easy it is to do so. What a dimwit.

I get sick of this crap. A high profile congresswoman has a "parking lot" come and talk to your congress person stunt and does not bring her Glock 19 along.
So, since she acted in an irresponsible way and gets shot by some nut, she and her AR-15 buying husband want the rest of us to pay for her irresponsible behavior.
Sickening....

I was recently thinking of the Mark Kelly situation concerning his purchase of an AR-15 for the supposed purpose of turning the gun over to authorities.

I am not sure that he didn’t prove a point about how lax our laws are. I live in Texas and have in the past purchased a firearm or two. When doing so I am provided with the appropriate paperwork from the state/government to fill out so that I may make the purchase, this is form 4473 and is mandated by the ATF.

To me if he had checked yes on box 11-a than he in fact lied on the document, as he stated he planned to purchase and turn over the firearm so therefore should be charged for falsification of said document which clearly explains that it is a felony to falsify the document in any way.

Just something I thought was odd and people should be concerned about as he was clearly not investigated although had that been you or I we would likely be talking to a lawyer about jail time.