Drew Peterson Has Another New Lawyer, The Public Defender! 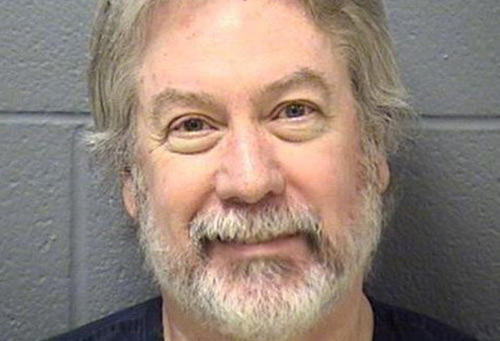 Joliet, IL—Retired Bolingbrook police sergeant, Drew Peterson recently convicted of murder is now serving a 38 year sentence that seems to guarantee he dies in an Illinois prison.  The conviction was obtained through tainted hearsay evidence banned in America since the adoption of our Bill of Rights.
Americans have lost or seen liberty watered down, as right after right is destroyed with unlawful searches, arms prohibitions, Due Process and free speech abuses.   Hearsay evidence in court trials is something out of the Third Reich, not a free nation.
Whatever you may think about Drew Peterson he would never have been convicted without the outrage of hearsay evidence being used against him.  Peterson was denied the Constitutional right to confront witnesses testifying against him.  If this happened to him it can happen to anyone.  Prosecutors can now convict anyone they choose for anything they want.  We fought wars to prevent what happened in the Drew Peterson case.
Several lawyers represented Peterson during the trial.  They all had different ideas but every ship has a captain and that was Joel Brodsky.   Neither Brodsky nor any lawyer can be perfect especially in a system that seems to change rules hourly.  I will suggest every lawyer on the team wanted to win but personalities and egos understandably clashed.
When Peterson was convicted the legal team suffered a massive meltdown.  The bad feeling and lawsuits between the lawyers may last for years or even a lifetime.  The blame naturally will fall on the captain of the ship.  I say the blame was misplaced because of the breakdown of simple justice through the introduction of hearsay evidence.
The term, Ineffective Assistance of Counsel was used to attack former lead lawyer, Joel Brodsky By Steven Greenberg.  Every appeal seems to allege ineffective lawyering because it’s a necessary shot to win a new trial.   Even the greatest lawyers can be found ineffective at some time in a complicated trial.  The claim has been overblown.
In the end an understandably desperate Drew Peterson was convinced he’d instantly win a new trial by allowing legal team member Steve Greenberg to fire Brodsky and crafts a motion for a new trial.   Brodsky was forced to withdraw from the defense and then his legal strategy became the target of Greenberg’s motion for new trial.  It was a nasty display that seemed more about vendetta than real issues.  Somehow the hearsay evidence issue was lost in the avalanche of bad feelings.
The Motion for a new trial was an in artful mess that did not survive and Peterson was sentenced to prison.  Suddenly and quietly Greenberg and his co-counsel dropped Peterson as a client.
That withdrawal by his new lead lawyer Greenberg left Peterson totally unrepresented.   The Court has already appointed the Illinois Appellate Defender for further proceedings that are expected to take years or even decades to resolve these incredibly important issues.
The Drew Peterson Defense Team is dissolved now.  In retrospect their enemy was government tyranny not each other or failed valiant efforts.   The prosecutor along with the Illinois Legislature and the trial judge ganged up to deprive Peterson of his right to confront witnesses against him in court.  Unfortunately tyranny won and civil rights, freedom and liberty lost.

I am amazed that this "hearsay" rule has passed any Constitutional muster, even in Illinois. One thing is for certain, and that is Mr. Peterson's own bravado has been chiefly responsible for his imprisonment.

If Mr. Drew Peterson is innocent then I would NOT blame Drew the victim or his bravado.

None of us should be jailed on account of bravado, and also only if we have committed a real crime.

Who is going to ensure that the guardians and the system is honest - in a society that for the most part cannot see and does not know first hand the corruption or just doesn't care?

First off even if Drew his guilty they only had hearsay. Which is a joke.This could happen to any one now basically meaning anyone can go to the police now file a report get a bunch of people to lie on you and guess where you will be sitting in jail.