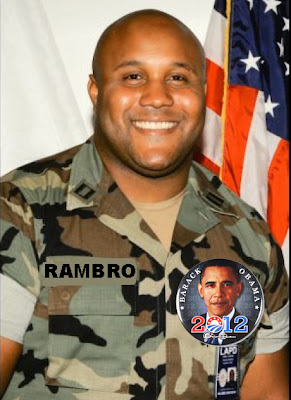 Los Angeles, CA—When guns are outlawed only outlaws will have guns.  That well-worn saying has never been better demonstrated by disgraced and fired LAPD officer Chris Dorner.  In a dumbfounding paradox Dorner was an advocate of Obama and the failed gun ban Democratic Party dogma.  Of course Dorner apparently wanted to make sure his future victims would be disarmed.
Dorner had quite a cache of weapons already banned under California and federal laws. He had at least two firearm silencers. He had several banned M-4 platform rifles.  He also had banned gas grenades.  Most of his handguns had magazine capacities well over the California 10 round limit.  He had numerous already banned magazines for his rifles and pistols.
Local and federal gun laws were violated by Dorner not to mention his murdering four and the maiming of his other victims. Dorner went to war with the cops.   In at least two regrettable cases cops went to war with unarmed innocent civilians using those banned firearms!  Okay the bans did not apply to the cops.
The proposed Obama/Feinstein gun bans or the so-called universal background check legislation would have had zero impact on Dorner or his deadly crime rampage.  By the way, where did Dorner get those banned silencers and gas grenades?
With our incredible technology breakthroughs of 3-D printers and computer driven CNC machines manufacturing firearms has never been earlier.  The master machinist skills needed to make quality firearms is a thing of the past. Ammunition magazines are a snap to make.  I guess our politicians want to have booming underground gunmakers make handsome profits.
In conclusion gun laws and gun bans only impact law-abiding people.  Controlling guns does not work any better than controlling narcotic drugs.

Point well made! The irrational hypocrisy and blindness to it is readily apparent in this murderer's words compared to his actions!

Point 1. "This is not ... about supporting the killing of innocent people. It’s supporting fighting back against corrupt cops and bringing to light what they do.”

Point 2 “How the police handled this -– they were the judge, the jury and the executioner,” ... “As an American citizen, you have the right to a trial and due process by law.”

Point 3 African American males and their children last week were scared for their lives in California if they bore any resemblance to Chris Jordan Dorner. Don't know how Asian women got shot? Seems like any of us could have been shot by police last week for a flimsy reason.

And is this a window into how the government would take citizens' guns away?

Dorner was the walking definition of hypocrite. Good riddance to Crispy Dorner.