Los Angeles, CA—Today desperate measures in the form of an unprecedented $1 million reward was offered for information leading to the capture of Christopher Dorner.
Los Angeles Mayor Antonia Villaraigosa announced the reward details at a press conference this afternoon. The money was pledged by various sources including the L.A. Dodgers baseball team.
For now it looks like Dorner ran into unexpected difficulties when his pick up truck became disabled from a broken axle.  The burned truck and contents that reportedly included two M-4 platform rifles and some camping gear were found in the Big Bear Mountains.  Severe weather conditions may have dashed all of Dorner’s hope for survival and perhaps he found a remote place to take his own life.
Searching that remote area considering the weather conditions can be challenging.  Ground and air searchers equipped with modern FLIR (thermal Infrared Imaging devices) could quickly spot the heat profile image of a 270-pound man particularly during cold weather.  However, FLIR devices can be defeated if the person evading capture has adequate thermal coverage provided by special cold weather gear.  With Dorner’s training he should know that. 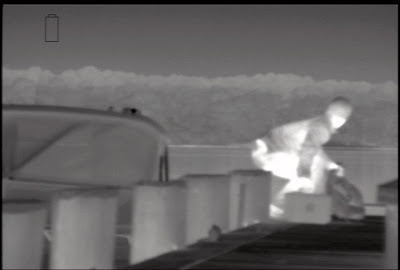 On the other hand the broken axle could be an elaborate effort to mislead the massive land and air posse out looking for him.  Somehow I don’t think that’s the case.  It would be very difficult to purposely break an axel and arrange for a secondary means of transportation away from that area.

I made a check for pilots and aircraft owners for Dorner and found there were none.  This was after hearing he may have had pilot's training in the Navy.
If Dorner is still alive he could do a huge favor for a friend and arrange it so he or she could provide the information and cash in on the reward.
I still want to do a video interview Dorner if that is in anyway possible. Dorner would not be the first fugitive I interviewed for newsgathering purposes.
Dorner is an interesting study along with the malignant issues that brought him to this point in history.  This story however begs for a spectacular ending but for now it looks like it will end with a whimper.

even if Dorner who is at the center of all this illumination - is now a murderer as well as an ex LAPD police officer.

Many radio hosts don't have a handle on how distorted things can get when it comes to covering up police and institutionalized abuses and corruption.

Where
1) injustice lurks at every corner - & in the darkness - and if an LAPD officer should blow the whistle on another LAPD officer for excessive force or murder!!!!

2) plus the injustice of the lapd's secret hearings - a set up to cover up, intimidate!!!! And dirty up the whistleblower -- in the so called justice system of california.

All so the big blue code of silence - can continue unhampered
against its Citizens, Residents and Illegal Aliens of California.

Chris Dorner is not a hero - but he has illuminated and heralded the darkness within the LAPD (and other police forces) which turn events on the whistleblower of police corruption and excessive force and murder - which the people of California should know about so that change for the better can take place.

Sounds just like the two-tier system of discipline on the Chicago Police Department. Those with political clout cab literally get away with murder, while those without end up fired and in shame.

There is no doubt that there is validity to this officer's story.

I am amazed that this has not occurred in Chicago yet with some of the railroadings that I have witnessed.

It looks like the LAPD is desperate to keep a lid on this thing.

I find the reaction of some of the general public to be as shocking as Dorner's actions. The fact that two of his victims had absolutely no influence or control of how he was treated or general policies of the LAPD and that the Riverside police officer he murdered had minimal if any influence on LAPD policy seems to have escaped the attention of those supporting Dorner. Rather than a shining knight in armor, I see a person reflecting the same behavior he is accusing the LAPD of, regardless of the actual culture at LAPD.
As far as the burning truck and equipment, I would bet a dollar to a donut that he left the M-4's and camping gear as distractions. I expect that he had extra equipment that he carried with him,leaving some to burn, even though I speculate that the broken axle was not intended.

I read the Tribunes headline one day" Police Code of silence broken", I retired soon after, because this job has gone to hell. Everybody Rattin' off the next guy to save themselves! bunch of Pussies ! If you do wrong and get caught, man up and keep your mouth shut!

I am amazed that this has not occurred in Chicago yet with some of the railroadings that I have witnessed.

It looks like the LAPD is desperate to keep a lid on this thing.

it's because we've got seasons, not 24/7/52 sunshine baking their heads into a cerebral pressure cooker.

plus, we are, as a rule, the salt of the earth.

while they are, as a rule, hot sauce.

we are, therefore, we think.


they think they think, therefore, they is the bad ass.

Paul - the timing was off - but you did get the spectacular ending this story was begging for.


Paul said "This story however begs for a spectacular ending but for now it looks like it will end with a whimper."