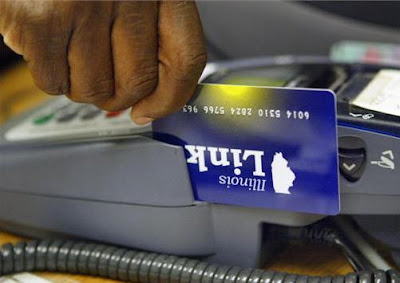 Chicago, IL--In order to collect food stamps, welfare, and those wildly popular cash cards the government won’t demand proof of legal residency or even positive identification of the recipients.
Fingerprinting and a little database management could prevent redundant payments, ineligible precipitants, and alike.  Our politicians can be counted upon to obstruct any effort to contain the fraud.
The direct deposit of funds into bank accounts allows those on the dole to live anywhere in the world as they collect from as many as 50 states.  Grab a few identities along the way and the sky is the limit!
Around 1970 I learned a trick by a high rolling Chicago lady.  She had furs, jewels and bought a new car every year.  She complained about the cost of her facelift saying everyone was entitled to such elective medical procedures free of charge.
The woman had at least a dozen names on a mailbox at an apartment where she did not even live. Like clockwork this woman went to the mailbox when the entitlement checks rolled in collecting them.
I learned later she created sham residences in Wisconsin, Michigan and Indiana and pulled the same stunt in those states. She complained that her trips to get the checks and cashing them locally were exhausting and interfered with her winter travel to the Bahamas.
The woman spent a lot of time gathering and cashing checks she’d never have to deal with today. Those trips to the mailboxes are a thing of the past since electronic banking is here to stay.
I dated the woman's daughter who was a student at a local university who went on to a free ride at a prestigious graduate school courtesy of mom's entitlements.
Unfortunately the woman died before the new banking technology made occupation easier than ever.
Posted by Paul Huebl Crimefile News at 7/31/2010 07:03:00 AM