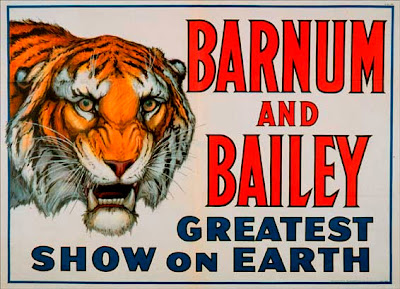 Okay, I’m no fan of either Democratic candidate and don’t care for the Manchurian Candidate pretending to be a Republican either. That being said watching the Black/White voter polarization being fueled by Obama’s 20 year spiritual advisor and hatemonger is a real hoot!

There is no nice way around this mess for voters, other than to start fresh with a new slate of candidates. That won’t happen unless the current candidates take a much needed cruise on a very leaky boat.

With the new Information Age candidates have serious difficulties hiding their warts. The Swiftboat heroes saved us from a potential disaster four years ago. Obama’s and Clinton’s demons are here to stay too.

Later McCain will have some surprises that will put him into a state of seizure too. Speaking of seizures, when McCain was a much younger freshman Senator he publically called the East Mesa, Arizona retirement community of Leisure World, Seizure World. As Reverend Wright would say, “McCain’s chickens will be coming home to roost.”
Posted by Paul Huebl Crimefile News at 4/29/2008 12:49:00 PM