A Review of a Film I Love! Toni Erdmann Rocks! 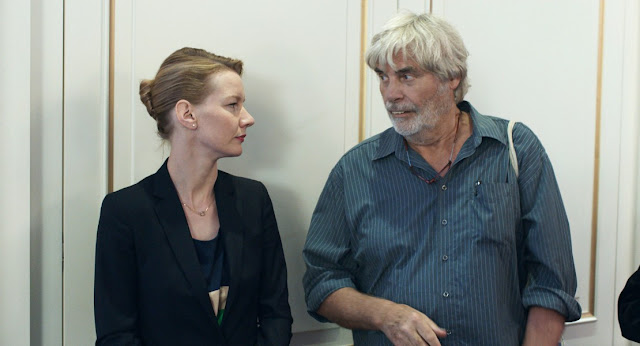 Los Angeles, CA—I love German films because they helped me learn the German language when I was a young Army medical corpsman serving in that great nation.  Today German films and TV series are simply terrific!

Toni Erdmann is a favorite and the shoe-in for the Best Foreign Film Oscar Award. It's in German, Romanian and English.  Of course The film is sub-titled in English.
I had to see what the major film festival's buzz was all about. I won’t spoil it for you but will tell you it’s about a somewhat lonely old curmudgeon, Winfried Conradi aka Toni Erdmann (Peter Simonischeck) who refused to grow up.

Our aging protagonist is never at a loss for a prank or joke and he longs to bring his successful and beautiful role model daughter, Ines Conradi, (Sandra Huller) back into his life.

Our hero invades his daughter’s life as she is working hard on an Important business trip to Romania.  Needless to say the complications pile up in a big way.

This is a touching comedy that will have every father and daughter to rethink their relationship.  I loved the stellar acting and my money in on the Oscar for this film.

This film was written and expertly directed by Maren Ade.

One wonderful surprise happens when Ines sings accompanied by her father on a keyboard.

This film was not lost on our own Hollywood filmmakers that have announced an American remake of Toni Erdmann.  This will bring Jack Nicholson out of retirement and pair him with the fabulous, Kristen Wiig.

I don’t want to miss either version.  The story is so incredibly compelling.
The Trailer:

for a real blast watch the series ""band of Brothers' dubbed into German for its German tv audiences, awesome and very strange,