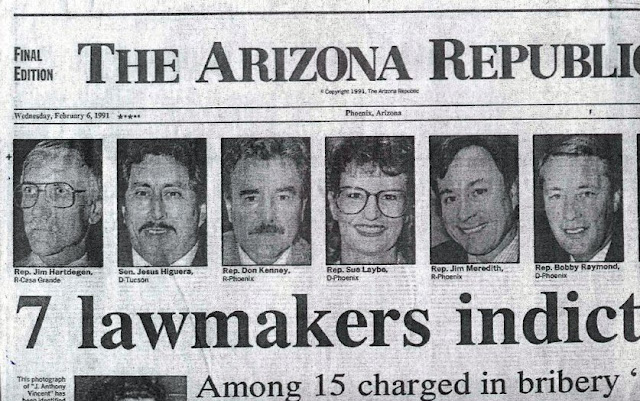 Phoenix, AZ—When I began lobbying the Arizona State Legislature for the Arizona Association of Licensed Private Investigators it was a real eye opener.
There are 90 members of the Legislature and back then they were not yet subject to term limits.  Many of them were seemingly decent.
The self-elected leadership had the real power and they were difficult to talk to about the legislation that was with beneficial or damaging to the industry, taxpayers or both. Along with the power of leadership came magnificent arrogance.
There was a price for even minimal meaningful access.   Without campaign contributions or other payments there was no access to the leadership.  Access to the unwashed members was usually free but in general getting any significant help from them was also for sale.
There was an undercover law enforcement sting conducted in 1991 called AZSCAM.  It was named after the notorious FBI sting call ABSCAM.
The late Arizona undercover operative named, Joe Stedino brought bags of cash to members of the Legislature and found several incredibly reckless and greedy takers.  Hidden video of these fools grabbing the cash made for great television!  They were quickly indicted, disgraced and served prison terms.
Sadly the leadership of the Legislature was warned by the late director of the AZ Dept of Public Safety and avoided Stedino like the plague.
I knew some the defense lawyers and prosecutors well enough that they told me about the tip off. However nobody could ever prove that was the case.  Arizona’s political leaders made sure that the AZSCAM investigation would never widen.
It's politicians that appoint all of the top law enforcement jobs and chasing corrupt government officials is a quick career ender.  There are very rare instances where the leadership wants to exile some fellow member not considered a team player and he or she just might win a trip to Club Fed.
Every AZ lobbyist knew that they were dealing with legislative pimps and whores.  Getting their needed leadership legislative access was anything but free.   Those that could paid up and were successful.  Since I had empty pockets AALPI always went without.
The extortion game was somewhat reversed because lobbyists learn the unwritten pay to play rules.  Matching the success moving legislation with the contributions is simple.  However nobody ever gets in trouble anymore in any city council, state legislature of for that matter the U.S. Congress.
Recently I read something that amazed me.  A professor at a prestigious university wrote about something that just rocked my conscious.  A foreign government needed access to our Congress and Whitehouse.  Yes, they have ambassadors, but in order to get access they were forced to hire a high-powered Washington lobbyist!
I actually saw that shameful lobbyist’s contract.  How outrageous is that?  That clear and convincing evidence may never get significant attention!
How can we stop this?  Oh, you say simply make a law outlawing the practice of lobbyists handing out money?  There’s just one problem the pimps and whores in every lawmaking body in America would never vote for that!  I don’t know the solution; our founding fathers sure fell flat on that one.
Getting elected to any legislative position is a sure ticket to wealth.  For some people crime pays not only pays, it pays really big.  You can count on law enforcement turning a blind eye for obvious reasons.
What’s the answer?  When I’m in the right neighborhood I'm going visit a certain Political Science professor for his input.  Yes, I think it's time for another documentary film!