Cops Enforcing Democrat's Trivial Laws Can and do Turn Deadly! 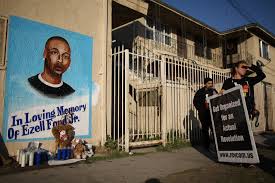 Los Angeles, CA—There has been a rash of deadly police shootings that have fired up emotions.  Those complaining the most vote for the politicians most responsible for creating the tinderbox conditions.
Democrats have never found anything they did not want to criminalize or tax to death.  They were the driving force behind every kind of vice law like gambling, prostitution.  They are also the ones that demanded that cops enforce laws they created for wearing seatbelts.
Every large city in America (and they are all run by Democrats) have enacted huge fines for parking and traffic violations even going so far to computerize cameras to issue citations in conjunction with radar or red lights.
Cops were once people we could count upon to help and protect us. However Democrats have turned cops into government extortionist bagmen.  Cops are feared because they have a serious financial impact on citizens they contact.
Cops are sworn to enforce all laws including those for the most trivial violations. They have no choice but to arrest and cite.
Now when cops do their job and people get hurt or worse when they resist arrest and assault the cops it’s the Left Wing that whines and screams the most.
I think what the Left really wanted is for these trivial laws to only be enforced against affluent White people.  Of course it does not and should not work that way.
The trivial laws have also become Probable Cause tools to stop and search those suspected of more serious crimes.   The majority vast majority of times these stops are fruitless but innocent people are understandably left angry for being singled out for a search.
There is a better solution and that is to get these laws off the books and to stop using cops like Mafia enforcers.
Perhaps the big city Democrat politicians need to entice the productive taxpayers with meaningful tax breaks to return to their cities.
Democrats need to learn how to embrace freedom rather then over-regulating everything in sight.   They need to encourage rather that discourage self-reliance.
Cops need to be returned to their traditional role as trusted and respected keepers of the peace.