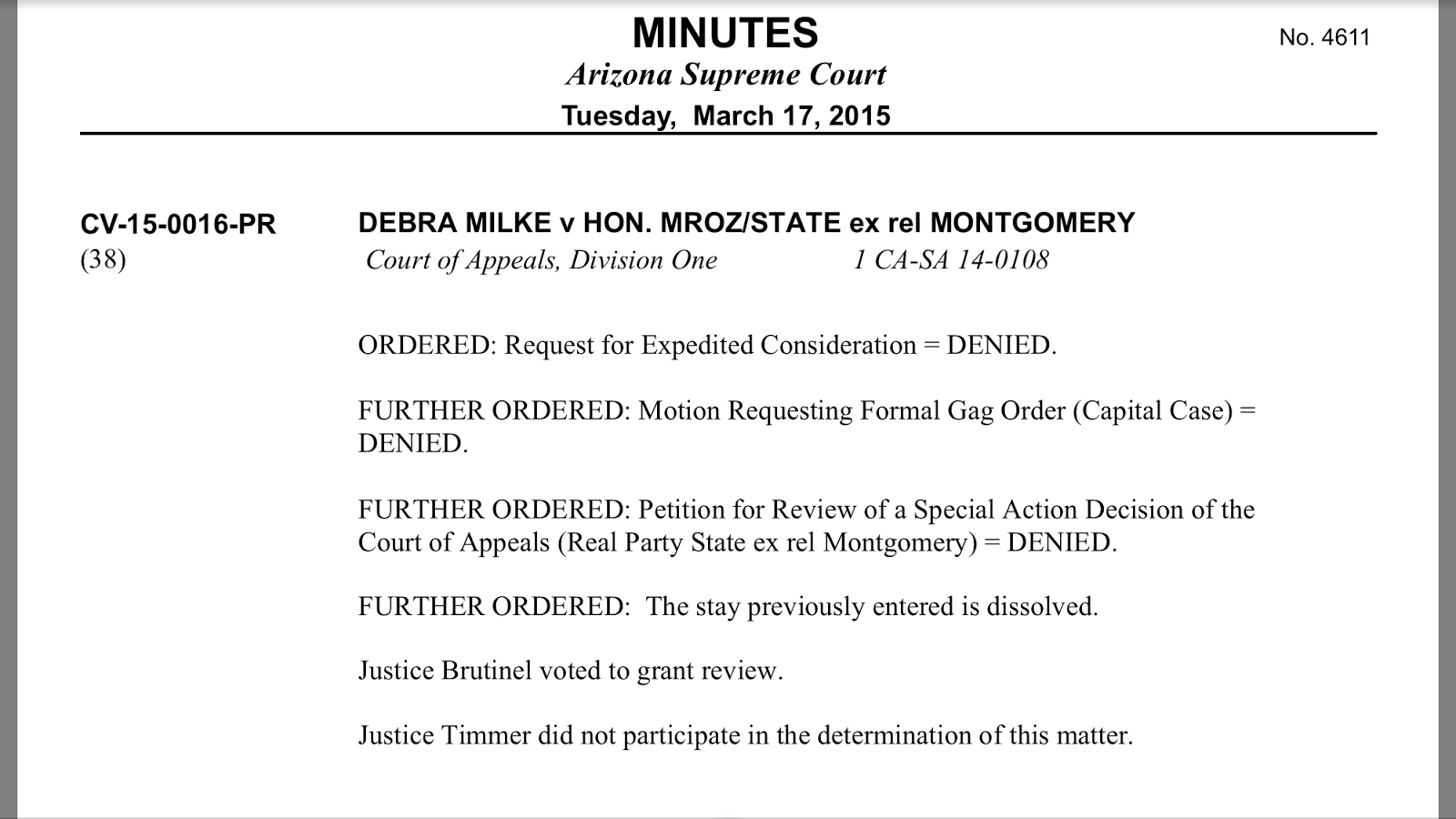 Phoenix, AZ—Prosecutors went to the Court of Last Resort to salvage their soiled reputations and that of a disgraced former cop. Finally Debra Milke is free even though she already paid a price far greater than that of most convicted murderers in America.
It was not just Prosecutorial Misconduct that freed Milke but it was really about her innocence.
Had there been a retrial there was not a scintilla of a chance they'd have re-convicted Milke.  This was just nothing more than an "Hail Mary" effort to limit corrupt official's liability under the doctrine of Collateral Estoppel.  That's legalese that would decree in a civil lawsuit that since the judge let the trial commence, that the cops and prosecutors were acting in good faith.
This has been a 25 yearlong odyssey that began December 3, 1989.  That day I met Milke as she was being booked into the Madison Street Jail on a charge of murdering her four-year old son Christopher.
It was just two hours earlier when Former Phoenix police detective Armando Saldate claimed Milke confessed this horrible crime to him.  He was told to record any interview with her but didn’t. He kicked out fellow officers and medical personal from a nurse’s office at the Pinal County Sheriff’s Department headquarters to preclude any witnesses.
Now at the jail using a hidden tape recorder I asked Milke if she told the police she had anything to do with the death of her son.  She became angry and responded, “That’s crazy, who told you that?  I had nothing to do with the death of my son!”
Since Milke had not been allowed to make a single phone call or get advice from anyone in that short time space it was obvious that there was never a confession.
At her trial Milke had a grossly ineffective and pathetic lawyer.  I was  never called as a witness where I could have played my crucial audio tape for the jury.  If I could record Milke why could't Saldate?
The only evidence that convicted Milke was Saldate’s perjury where he claimed that Milke Confessed. Milke was sentenced to the Gas Chamber and spent decades in solitary confinement on Death Row at Arizon's Perryville Prison.
This changed after Milke finally got better lawyers and after more than a decade their efforts culminated in this final ruling that the case must be dismissed with prejudice.  That effectively and finally ended the 25 year nightmare of Debra Milke.

Aside of the relief for Debra Milke other victims of prosecutorial and police misconduct will benefit from the Milke ruling.   The most immediate beneficiary with be convicted killer Jodi Arias.  That's because cops destroyed computer evidence that would have supported Arias’ claim she killed her former boyfriend in necessary self-defense.
Prosecutorial misconduct is rampant in America.  Prosecutors routinely hide evidence from the defense lawyers that points to the innocence of their clients.

Since the police investigate the cases with people are killed or injured they control nearly all the evidence that exists.  It’s here were is where the cheating begins.

Prosecutors and cops have nearly blanket immunity for their misconduct and that’s why they rarely face punishment even after they are caught red handed.   That immunity is obviously the root of the problem.
Maricopa County Attorney Bill Montgomery went to the wall to protect the thugs in his office responsible for the Milke travesty.  Montgomery however could not succeed with the overwhelming evidence that exposed this epic misconduct.
Sadly the only people punished here with be the taxpayers.  There with be no discipline or criminal charges for cops or prosecutors. They won’t have to pay a single penny for their dastardly deeds. Taxpayer-funded lawyers will defend these creeps in court.
Milke now has serious legal help in the form of civil lawyers and they have filed a lawsuit on her behalf for the violation of her civil rights.
That 72-page complaint is a sordid saga of one outrageous act after another.  It should make every American’s blood boil.  We’d expect this kind of activity in Iran, North Korea or Hitler’s Germany but not here!

"Extremism in the defense of liberty is no vice. And moderation in the pursuit of justice is no virtue."
- Senator Barry Goldwater quoting Cicero