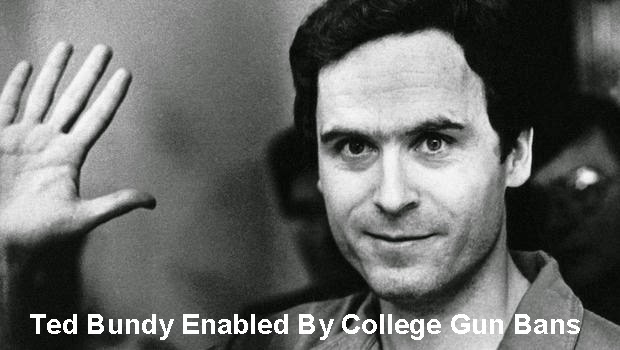 Washington, DC—The United States Supreme Court reaffirmed and settled the primary Second Amendment rights issues of all Americans in two somewhat recent cases, Heller and McDonald.
Despite this some arrogant politicians feel they and some of their supporters are above the law.  They still seek to use the full force of government and violence against anyone exercising their gun rights.
It looks like it may take several more years of lower court battles before these determined and lawless political thugs are reigned in.  These cases move ever so slowly through the courts.
The Second Amendment simply says we can possess and carry firearms.  Impairment of these rights by government is nothing more than a pure Civil Rights Violation.
On their face laws barring Campus Carry or those that allow for Gun Free Zones clearly violate the law of the land.
Campus Carry:
These prohibitions like every law only affect the law-abiding.  The late convicted serial killer Theodore “Ted” Bundy was a very real beneficiary of the bans on Campus Carry.
Theodore Robert "Ted" Bundy was an American serial killer, kidnapper, rapist, and necrophilia addict who assaulted and murdered numerous young, primarily college women during the 1970s and possibly earlier.
On at least two occasions this incredibly clever killer broke out of jail only to continue his raping, slashing and murdering of America’s beautiful daughters.
College campuses were Bundy’s choice to prey on young, vulnerable and unarmed women.  Bundy, a one-time law student positively knew he’d never find armed resistance on any college campus.
Just before his execution, after more than a decade of denials, he finally confessed to at least 30 homicides committed in seven states between 1974 and 1978.  Bundy actually beheaded at least 12 of these young women.  The true victim count remains unknown, and could be substantially higher.
I have to ask why some of our politicians insist upon being accessories and enablers to the all of the Ted Bundy’s of America?
Gun Free Zones:
What people and lawmakers seem to forget is that our cops can’t just simply search people for weapons even if they look shady or suspicious.  That is unless or until they actually commit a crime!
The Fourth Amendment protects foreign terrorists, killers, criminals and the law-abiding equally.  The difference is that the law-abiding respect the various gun bans, even those that violate their rights.
Gun Free Zones are found at libraries, Parks, malls, government buildings and schools.  Accordingly, these are guaranteed soft targets and popular choices for mass shootings.
This comes after decades of our politicians handing over massive amounts of military weapons and cash to Islamic people that hate our culture and us.
We’ve meddled in these Muslim nation’s affairs trying to police them.   Accordingly they continually look for ways to murder innocent Americans where we live, work and play.
Aside from dealing with our own existing robbers, rapists and killers we have to deal with military trained and well-armed Islamic assassins.
The public policy of the Gun Free Zone is the product of incredible bliss and ignorance.  This concept deeply flawed and actually increases any potential danger.
Disarming the law-abiding in no way protects them.  On the contrary the Gun Free Zones are in fact nothing more than government created Killing Zones!

Actually the 2dA does not tell us we have the right to carry or own guns. It says that we have a God given right to do so, and that the government "shall not..infringe"..[d] that right.

Actually, "The Second Amendment simply [DOES NOT] say[s] we can possess and carry firearms." It does acknowledge our God given Right to do so, and does say the government "SHALL NOT INFRINGE" on that right. The difference is government has no authority to modify or grant or a "privilege" that's already an inherent right to self defense.

By definition, criminals and terrorists do NOT obey laws, including gun laws. Folks who "post" their properties and gvts which "post" areas as 'gun-free' only guarantee a target-rich environment. I feel that folks are safer at a gun shooting range or gun show than at a mall. The 2A is what enables all the other 9 amendments in the Bill of Rights. Own, shoot, carry..it is your RIGHT.

Well, I don't think people are in danger of being killed by terrorists (other than those employed by our own government). Anyone who seriously worries about a terror attack has got a screw loose (unless he happens to be part of an occupying army in the Middle East).

But yeah, if you believe in such things as "rights", then gun bans are a rights violation. I don't believe in such fantasies. I just think everyone acts in what he believes is his own interest, and the ruling class thinks (with some justification) that armed peons are not in their interest. So, we shouldn't be surprised at the constant attempts to disarm us. But being disarmed is an act of war, and anyone foolish enough to permit it deserves what eventually he is going to get as a result.

Too bad all those girls weren't armed. If each had been armed, and had had an even chance of killing Bundy whether or not she died too, then the odds are more than 100:1 that he would not have survived the 7th. Instead he got to at least 40.

Killing? What's necessarily wrong with it? Some men are rabid dogs, like Cujo. And should be shot.

In the case of the 2nd Amendment the criminal who is armed is not breaking the law, as all laws 'infringing' on any citizen's constitutional rights are moot. (The 2nd makes no distinction regarding criminal record but pertains to every citizen. The criminal's citizenship would have to be revoked in order to withhold his rights).
Should a government enact a law or regulation that infringes' on the second amendment, the supreme law of the land, that government then becomes a criminal entity and is therefore illegitimate. Using this reasoning one could make a case that any law that specific government enacts is just as moot because of the illegitimacy of that government.